An agent that implements path finding, path smoothing and actuator techniques to move around in a map. Written in C# (Unity)

The goal of this project is to implement an agent (the red cone) that is able to move to a certain point in the map without colliding with static obstacles or pedestrians (the green capsules). The agent's movement is constraint by an actuactor. There are two actuators, one that makes the agent move like a car (constrained turning angle, backing up, etc) and another one that makes it move like a human being (wider turning angle, turning on the spot, etc). Each actuator can be selected in the Unity editor. 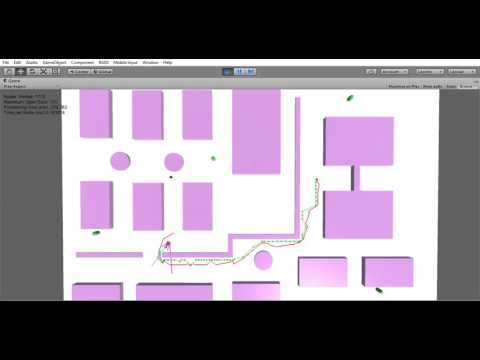 As you can see in the video, the agent is able to find, smooth and follow a path without colliding with anything. Its movement is constrained by actuators that make it behave like a car (a human could also be selected). This introduces several problems and requires custom techniques to solve since the agent can't turn without moving and, even while moving, its maximum turning angle is limited. In the case of the car, a backing up movement was implemented that allows the car to move backwards if you click behind it (but not to far, obviously). The project has several components (each presents its specific challenges):

An agent that implements path finding, path smoothing and actuator techniques to move around in a...
C# - Updated Oct 3, 2016 - 1 stars