A Django reusable app providing the ability for admin users to create their own forms within the admin interface, drawing from a range of field widgets such as regular text fields, drop-down lists and file uploads. Options are also provided for controlling who gets sent email notifications when a form is submitted. All form entries are made available in the admin via filterable reporting with CSV/XLS export. 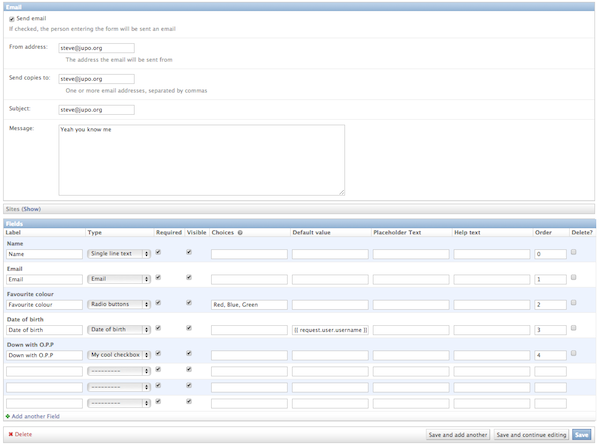 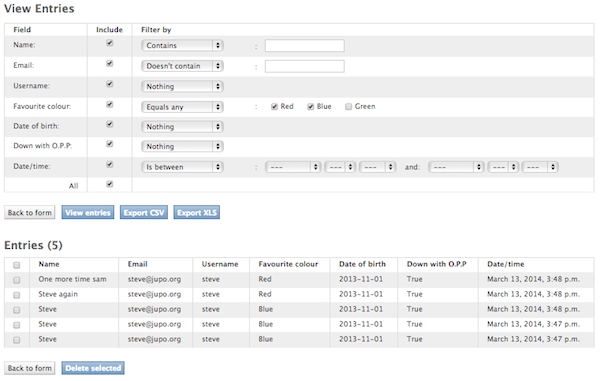 The easiest way to install django-forms-builder is directly from PyPi using pip by running the command below:

Otherwise you can download django-forms-builder and install it directly from source:

Once installed you can configure your project to use django-forms-builder with the following steps.

Add forms_builder.forms to INSTALLED_APPS in your project's settings module:

If you haven't already, ensure django.core.context_processors.request is in the TEMPLATE_CONTEXT_PROCESSORS setting in your project's settings module:

Then add forms_builder.forms.urls to your project's urls module:

As of version 0.5, django-forms-builder provides South migrations. If you use south in your project, you'll also need to run migrations:

Once installed and configured for your project just go to the admin page for your project and you will see a new Forms section. In this you can create and edit forms. Forms are then each viewable with their own URLs. A template tag render_built_form is also available for displaying forms outside of the main form view provided. It will display a form when given an argument in one of the following formats, where form_instance is an instance of the Form model:

This allows forms to be displayed without having a form instance, using a form's slug or ID, which could be hard-coded in a template, or stored in another model instance.

It's possible for admin users to create forms that allow file uploads which can be accessed via a download URL for each file that is provided in the CSV export. By default these uploaded files are stored in an obscured location under your project's MEDIA_ROOT directory but ideally the should be stored somewhere inaccessible to the public. To set the location where files are stored to be somewhere outside of your project's MEDIA_ROOT directory you just need to define the FORMS_BUILDER_UPLOAD_ROOT setting in your project's settings module. Its value should be an absolute path on the web server that isn't accessible to the public.

The following settings can be defined in your project's settings module.

You can also add your own custom fields or widgets to the choices of fields available for a form. Simply define a sequence for the FORMS_BUILDER_EXTRA_FIELDS setting in your project's settings module, where each item in the sequence is a custom field that will be available.

Each field in the sequence should be a three-item sequence containing an ID, a dotted import path for the field class, and a field name, for each custom field type. The ID is simply a numeric constant for the field, but cannot be a value already used, so choose a high number such as 100 or greater to avoid conflicts:

You can also define custom widget classes for any of the existing or custom form fields via the FORMS_BUILDER_EXTRA_WIDGETS setting. Each field in the sequence should be a two-item sequence containing the same ID referred to above for the form field class, and a dotted import path for the widget class:

Note that using the FORMS_BUILDER_EXTRA_WIDGETS setting to define custom widgets for field classes of your own is somewhat redundant, since you could simply define the widgets on the field classes directly in their code.

The django-email-extras package is used to send multipart email notifications using Django's templating system for constructing the emails, to users submitting forms, and any recipients specified when creating a form via Django's admin.

Templates for HTML and text versions of the email can be found in the templates/email_extras directory. This allows you to customize the look and feel of emails that are sent to form submitters. Along with each of the form_response email templates which are used to email the form submitter, you'll also find corresponding form_response_copies templates, that extend the former set - these are used as the templates for emailing any extra recipients specified for the form in the admin interface. By default they simply extend the form_response templates, but you can modify them should you need to customize the emails sent to any extra recipients.

Two signals are provided for hooking into different states of the form submission process.

Some examples of using the signals would be to monitor how users are causing validation errors with the form, or a pipeline of events to occur on successful form submissions. Suppose we wanted to store a logged in user's username against each form when submitted, given a form containing a field with the label Username with its field_type set to Hidden:

As of version 0.6, you can use Django template code for default field values. For example you could enter {{ request.user.username }} and the field will be pre-populated with a user's username if they're authenticated.

By default, django-forms-builder provides export of form entries via CSV file. You can also enable export via XLS file (Microsoft Excel) by installing the xlwt package:

A Django reusable app providing the ability for admin users to create their own forms.
Python - BSD-3-Clause - Last pushed May 21, 2015 - 1 stars

A Django reusable app providing the ability for admin users to create their own forms.
Python - BSD-2-Clause - Updated May 2, 2017 - 1 stars