License
Other
Install
go get github.com/Sedward/fabio/exit

Why build another HTTP router?

Both hardware and software routers like Citrix Netscaler, F5 Big IP, haproxy, varnish, nginx or apache require some form of configuration - the routing table - to route incoming traffic to services which can handle them. The routing table has to be kept in sync with the actual deployed set of services and instances during each deployment and each outage on every environment. This makes the routing table a crucial part of the configuration without the application cannot function.

fabio solves this problem by making the services themselves responsible for updating the routing table. Services already know which routes they serve since they have handlers who can handle requests for them. Once services push the routes they handle into the service registry (in this case consul) fabio can build the routing table and can re-configure itself on every change automatically without restart and without the loss of existing connections.

The motivation is also outlined in the presentation I've given at the dotGo EU pre-party in Paris on 9 Nov 2015. You can watch it here.

fabio was developed at the eBay Classifieds Group in Amsterdam and routes in total roughly 15.000 req/sec for the following sites without any measurable latency impact.

This is how you use fabio in your setup:

To start a sample server to test the routing run the demo/server like this:

Check the Debugging section to see how to test fabio with curl. 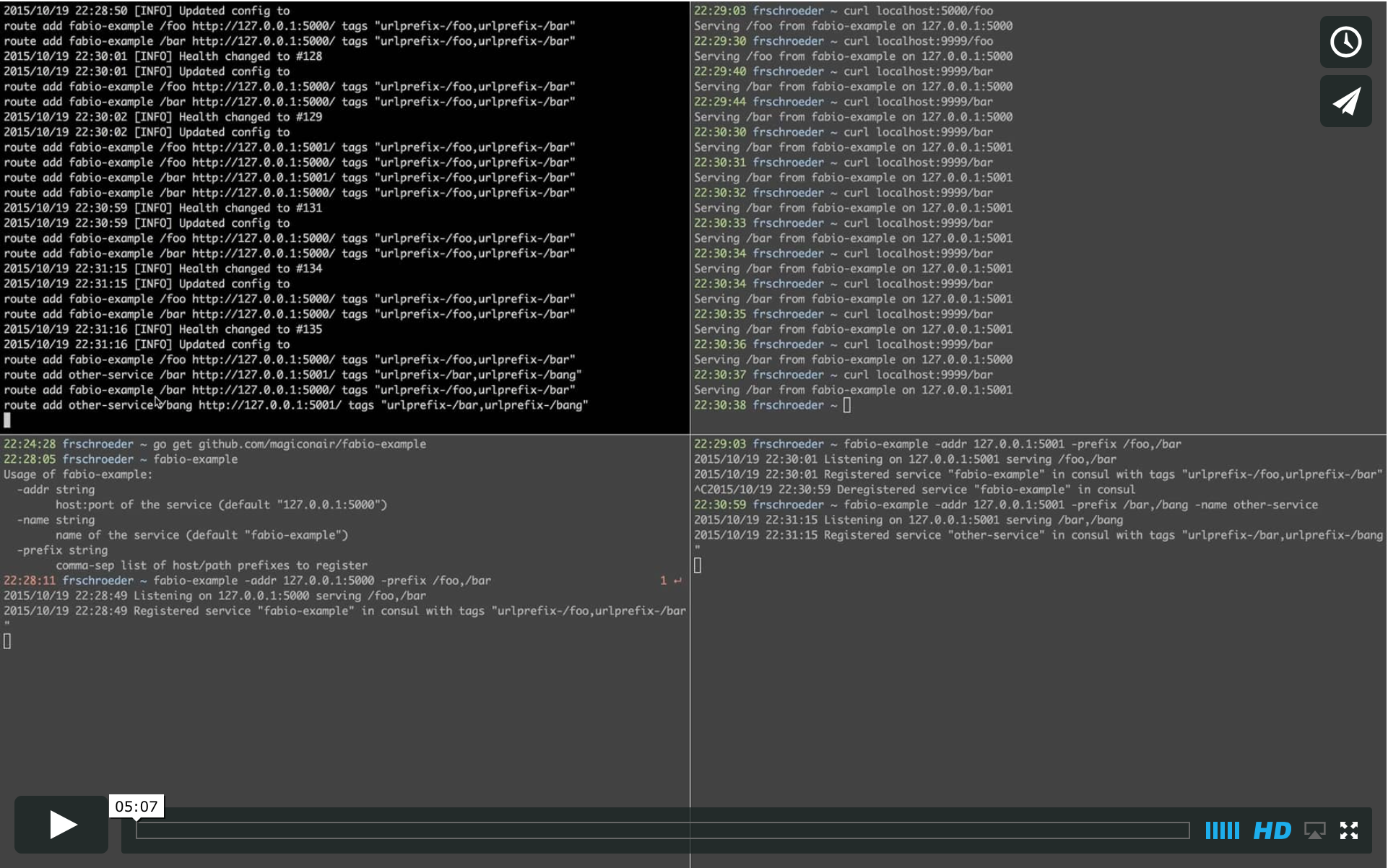 which will run it with the default configuration which is described in fabio.properties. To run it with a config file run it with

or use the official Docker image and mount your own config file to /etc/fabio/fabio.properties

If you want to run the Docker image with one or more SSL certificates then you can store your configuration and certificates in /etc/fabio and mount the entire directory, e.g.

Contributions to fabio of any kind are welcome including documentation, examples, feature requests, bug reports, discussions, helping with issues, etc.

If you have a question on how or what to contribute just open an issue and indicate that it is a question.

Your contribution is welcome. To make merging code as seamless as possible we ask for the following:

Once you are ready to send in a pull request, be sure to:

fabio is configured to listen on port 9999 for HTTP traffic and uses consul on localhost:8500 as the default registry backend. To configure additional listeners, different backends, enable metrics reporting or change other configuration parameters please check the well documented fabio.properties file. Each property value can also be configured via a corresponding environment variable which has the dots replaced with underscores.

The main use-case for fabio is to distribute incoming HTTP(S) requests from the internet to frontend (FE) services which can handle these requests. In this scenario the FE services then use the service discovery feature in consul to find backend (BE) services they need in order to fulfil the request.

That means that fabio is currently not used as an FE-BE or BE-BE router to route traffic among the services themselves since the service discovery of consul already solves that problem. Having said that, there is nothing that inherently prevents fabio from being used that way. It just means that we are not doing it.

In the following setup fabio is configured to listen on the public ip(s) where it can optionally terminate SSL traffic for one or more domains - one ip per domain.

To scale fabio you can deploy it together with the frontend services which provides high-availability and distributes the network bandwidth.

In the following setup fabio is configured receive all incoming traffic from an existing gateway which also terminates SSL for one or more domains. fabio supports SSL Client Certificate Authentication to support the Amazon API Gateway

Again, to scale fabio you can deploy it together with the frontend services which provides high-availability and distributes the network bandwidth.

To achieve the performance fabio sets the following defaults which can be overwritten with the environment variables:

When fabio is compiled with Go 1.5 and run with default settings it can be up to 40% slower than the same version compiled with Go 1.4. The GOGC=100 default puts more pressure on the Go 1.5 GC which makes the fabio spend 10% of the time in the GC. With GOGC=800 this drops back to 1-2%. Higher values don't provide higher gains.

As usual, don't rely on these numbers and perform your own benchmarks. You can check the time fabio spends in the GC with GODEBUG=gctrace=1.

Each service can register one or more URL prefixes for which it serves traffic. A URL prefix is a host/path combination without a scheme since SSL has already been terminated and all traffic is expected to be HTTP. To register a URL prefix add a tag urlprefix-host/path to the service definition.

By default, traffic is distributed evenly across all service instances which register a URL prefix but you can set the amount of traffic a set of instances will receive ("Canary testing"). See Traffic Shaping below.

A background process watches for service definition and health status changes in consul. When a change is detected a new routing table is constructed using the commands described in Config Commands.

The Traffic Shaping commands are also stored in the KV store.

The routing table is configured with the following commands:

The order of commands matters but routes are always ordered from most to least specific by prefix length.

For each incoming request the routing table is searched top to bottom for a matching route. A route matches if either host/path or - if there was no match - just /path matches.

The matching route determines the target URL depending on the configured strategy. rnd and rr are available with rnd being the default.

The auto-generated routing table is

The manual configuration under /fabio/config is

The complete routing table then is

fabio allows to control the amount of traffic a set of service instances will receive. You can use this feature to direct a fixed percentage of traffic to a newer version of an existing service for testing ("Canary testing"). See Manual Overrides for a complete description of the route weight command.

The following command will allocate 5% of traffic to www.kjca.dev/auth/ to all instances of service-b which match tags version-15 and dc-fra. This is independent of the number of actual instances running. The remaining 95% of the traffic will be distributed evenly across the remaining instances publishing the same prefix.

Websocket support works but is considered experimental since I don't have an in-house use case for it at the moment. I would like to hear from users whether it works in their environments beyond my simple test case before I declare it stable. It has been implemented with the websocket library from golang.org/x/net/websocket

You can test the websocket support with the demo/wsclient and demo/server which implements a simple echo server.

You can also run multiple web socket servers on different ports but the same endpoint.

fabio detects on whether to forward the request as HTTP or WS based on the value of the Upgrade header. If the value is websocket it will attempt a websocket connection to the target. Otherwise, it will fall back to HTTP.

One limitation of the current implementation is that the accepted set of protocols has to be symmetric across all services handling it. Only the following combinations will work reliably:

The following setup (or variations thereof) will not work reliably:

This is not a limitation of the routing itself but because the current configuration does not provide fabio with enough information to make the routing decision since the services do not advertise the protocols they handle on a given endpoint.

This does not look like a big restriction but is also not difficult to extend in a later version assuming there are use cases which require this behavior. For now the services have to be symmetric in the protocols they accept.

To send a request from the command line via the fabio using curl you should send it as follows:

The -x or --proxy options will most likely not work as you expect as they send the full URL instead of just the request URI which usually does not match any route but the default one - if configured.

To trace how a request is routed you can add a Trace header with an non- empty value which is truncated at 16 characters to keep the log output short.

fabio contains a simple web ui to examine the routing table and manage the manual overrides. By default it is accessible on http://localhost:9998/