Zipkin is a distributed tracing system. It helps gather timing data needed to troubleshoot latency problems in service architectures. Features include both the collection and lookup of this data.

If you have a trace ID in a log file, you can jump directly to it. Otherwise, you can query based on attributes such as service, operation name, tags and duration. Some interesting data will be summarized for you, such as the percentage of time spent in a service, and whether or not operations failed. 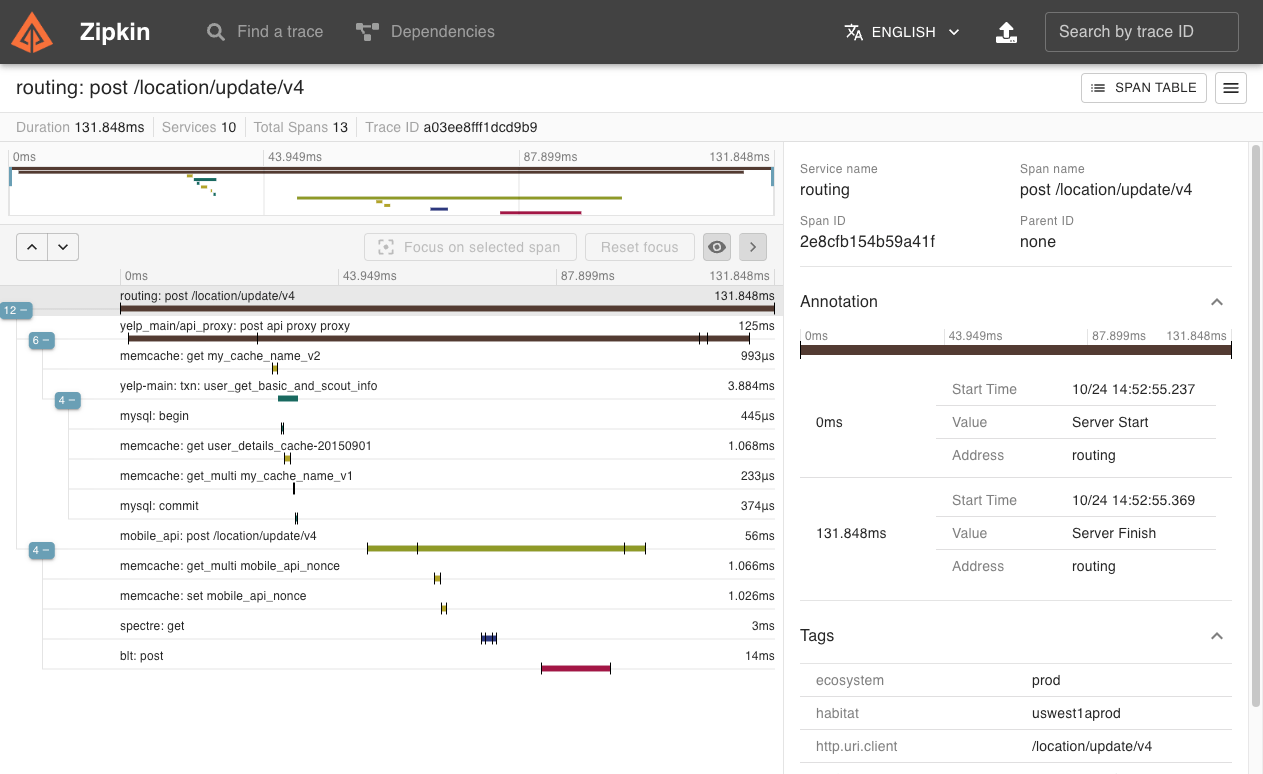 The Zipkin UI also presents a dependency diagram showing how many traced requests went through each application. This can be helpful for identifying aggregate behavior including error paths or calls to deprecated services. 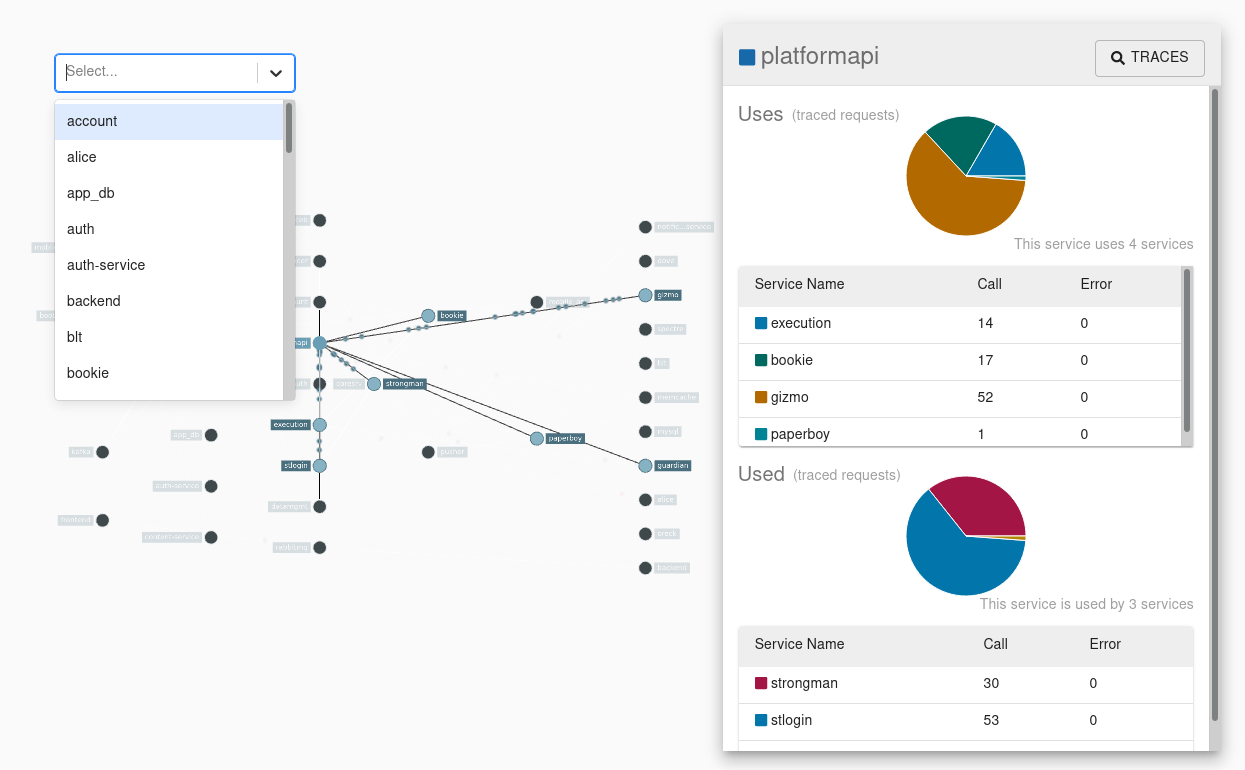 Application’s need to be “instrumented” to report trace data to Zipkin. This usually means configuration of a tracer or instrumentation library. The most popular ways to report data to Zipkin are via http or Kafka, though many other options exist, such as Apache ActiveMQ, gRPC and RabbitMQ. The data served to the UI is stored in-memory, or persistently with a supported backend such as Apache Cassandra or Elasticsearch.

The quickest way to get started is to fetch the latest released server as a self-contained executable jar. Note that the Zipkin server requires minimum JRE 8. For example:

You can also start Zipkin via Docker.

Once the server is running, you can view traces with the Zipkin UI at http://your_host:9411/zipkin/.

If your applications aren't sending traces, yet, configure them with Zipkin instrumentation or try one of our examples.

Check out the zipkin-server documentation for configuration details, or Docker examples for how to use docker-compose.

The slim build of Zipkin is smaller and starts faster. It supports in-memory and Elasticsearch storage, but doesn't support messaging transports like Kafka or RabbitMQ. If these constraints match your needs, you can try slim like below:

The core library is used by both Zipkin instrumentation and the Zipkin server. Its minimum Java language level is 6, in efforts to support those writing agent instrumentation.

This includes built-in codec for Zipkin's v1 and v2 json formats. A direct dependency on gson (json library) is avoided by minifying and repackaging classes used. The result is a 155k jar which won't conflict with any library you use.

Note: The above is just an example, most likely you'll want to use an existing tracing library like Brave

Zipkin includes a StorageComponent, used to store and query spans and dependency links. This is used by the server and those making collectors, or span reporters. For this reason, storage components have minimal dependencies, but most require Java 8+

The InMemoryStorage component is packaged in zipkin's core library. It is neither persistent, nor viable for realistic work loads. Its purpose is for testing, for example starting a server on your laptop without any database needed.

This is the second generation of our Cassandra schema. It stores spans using UDTs, such that they appear like Zipkin v2 json in cqlsh. It is designed for scale, and uses a combination of SASI and manually implemented indexes to make querying larger data more performant.

Note: This store requires a job to aggregate dependency links.

It stores spans as Zipkin v2 json so that integration with other tools is straightforward. To help with scale, this uses a combination of custom and manually implemented indexing.

The following API endpoints provide search features, and are enabled by default. Search primarily allows the trace list screen of the UI operate.

When search is disabled, traces can only be retrieved by ID (GET /trace/{traceId}). Disabling search is only viable when there is an alternative way to find trace IDs, such as logs. Disabling search can reduce storage costs or increase write throughput.

StorageComponent.Builder.searchEnabled(false) is implied when a zipkin is run with the env variable SEARCH_ENABLED=false.

The following components are no longer encouraged, but exist to help aid transition to supported ones. These are indicated as "v1" as they use data layouts based on Zipkin's V1 Thrift model, as opposed to the simpler v2 data model currently used.

The MySQL v1 component uses MySQL 5.6+ features, but is tested against MariaDB 10.3.

The schema was designed to be easy to understand and get started with; it was not designed for performance. Ex spans fields are columns, so you can perform ad-hoc queries using SQL. However, this component has known performance issues: queries will eventually take seconds to return if you put a lot of data into it.

This store does not require a job to aggregate dependency links. However, running the job will improve performance of dependencies queries.

The Cassandra v1 component uses Cassandra 2.2+ features, but is tested against the latest patch of Cassandra 3.11.

The CQL was written in 2015, based on the original Cassandra schema from Twitter, and since been extended. Spans are stored as opaque thrifts, which means you cannot query fields in cqlsh. The schema was designed for scale, including manually implemented indexes to make querying larger data more performant.

Note: This store requires a job to aggregate dependency links.

Running the server from source

The Zipkin server receives spans via HTTP POST and respond to queries from its UI. It can also run collectors, such as RabbitMQ or Kafka.

To run the server from the currently checked out source, enter the following. JDK 11 is required to compile the source.

Releases are uploaded to Bintray and synchronized to Maven Central

Snapshots are uploaded to JFrog after commits to master.

Released versions of zipkin-server are published to Docker Hub as openzipkin/zipkin. See docker for details.

https://zipkin.io/zipkin contains versioned folders with JavaDocs published on each (non-PR) build, as well as releases.