Meze, a word with its roots in antiquity, describes a selection of small dishes served accompanying alcoholic drinks, whose purpose is three-fold: to complement and enhance the taste of the drink, to provide the backdrop for a social gathering and to decouple the implementation of the individual dishes so that they may be consumed by the hungry developer in whichever way suits them the best.

The above is as true for real life Meze as for it's Javascript counterpart.

Born out of a thought experiment, Meze provides the Component Composition API popularized by the React library in order to declaratively compose data and process. Meze is designed to make it painless to express complex operations while striving for the simplicity of functional composition.

The most obvious question in regards to Meze is - why would we want to add it to our stack? Meze was born out of a thought experiment, in which we contemplated what componentisation was and what benefits it gave us. Out of that experiment a Research Question was born, which was:

How could the Component Composition we've grown to appreciate in building our UIs be used to build more declarative, less cohesively coupled code in our server side code as well.

We know, we know, Research Questions are supposed to be more granular and specific but in truth, an abstract question is needed when you're interesting in providing an abstract answer. The key difference between React and what we're looking for is that React is designed for long lived component trees with every changing state, while what we need for our server side processes is something slightly different. What we need is a pipe line of operations, resulting in some kind of result and often, some side effects too. This called for a very different implementation approach from what React could provide. That said, the Component Composition API, which is the basis of what separates React, Inferno and similar libraries from other UI focused libraries, is very intuitive, generic enough to suit our needs and most importantly - has received wide adoption and so would make onboarding new developers into the Meze ecosystem easier.

So what we've built is a library using the familiar Component Composition API with unidirectional data flow and separation of concerns whose internal implementation is designed as a compose & reduce operation rather than a long lived tree of flowing state.

In order to use babel-preset-meze you'll also want to define it's usage in your .babelrc file (we've included the es2015 preset).

Once you have both of these modules installed and configured you can start defining components and composing them together. 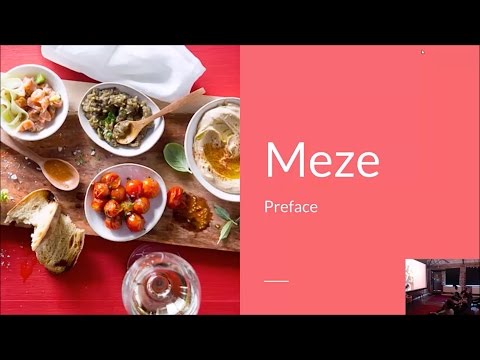