Here's how to compress 24 bytes of data down to 2 using Fibonacci coding:

Modern PCs have stacks of RAM, so it's usually not a problem that integers take 4-8 bytes each to store in memory. There are times however when this is a problem. For exammple:

In almost all cases those numbers can be stored in a much lower number of bytes. Heck, its possible to store three integers in a single byte.

The example in the TLDR section used the Fibonacci codec. Whilst this codec is excellent for small numbers, it's not so great when numbers get larger. You really need to select a codec with your domain in mind. Following is a summary of the codecs available, their strengths and weaknesses.

Bits required to represent each number with each codec

Keep in mind that there is a physical minimum possible size for each number. That is displayed in blue. 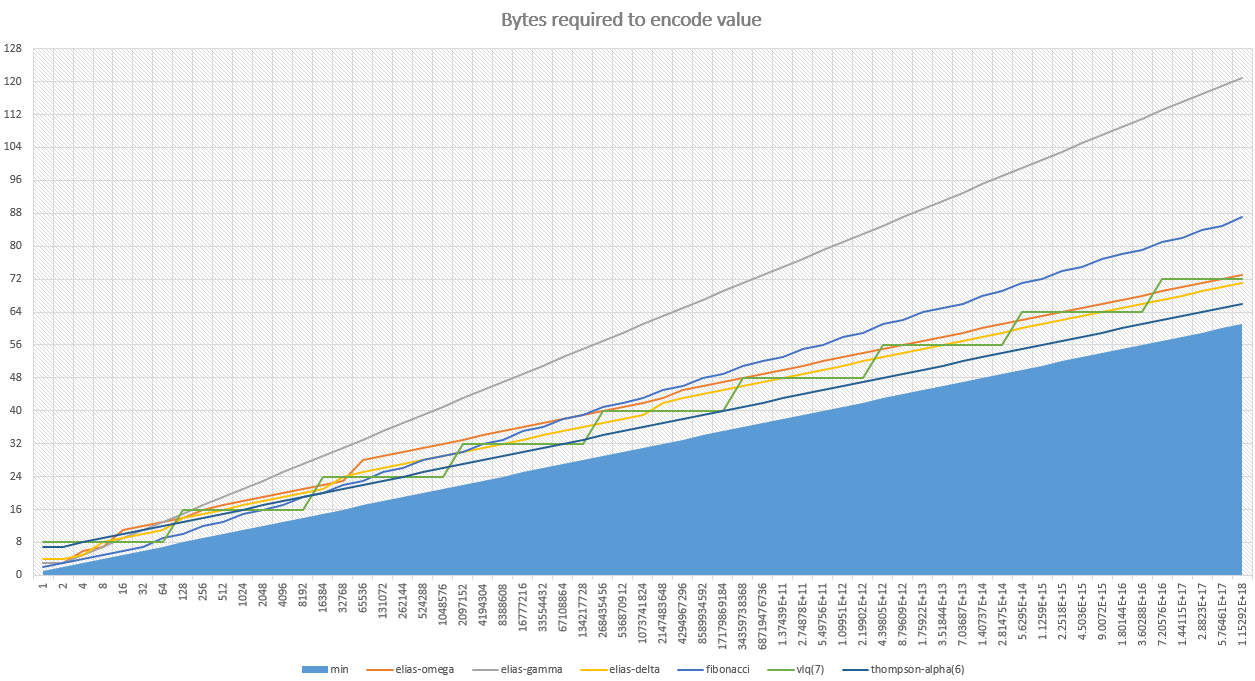 This is a very interesting algorithm - it encodes the numbers against a Fibonacci sequence. It's the best algorithm in the pack for numbers up to 8,000, It degrades after that point - but not horrendously so. This is my personal favorite algo.

I couldn't find an algorithm which performed well for large integers (>8,000), so this is my own. In it's default configuration it has a flat 6-bits of overhead for each integer, no matter it's size. That makes it excellent if your numbers have a large distribution.

It seems VLQ was originally invented by the designers of MIDI (you know, the old-school MP3). The algorithm is really retro, there's stacks of variations of it's spec and it smells a little musty, but it's awesome! It produces pretty good results for all numbers with a very low CPU overhead.

Similar to VLQ, Inverted-VLQ is a slight variation which uses a final-byte flag, rather than a more-bit flag. Theoretically this has slightly better CPU performance for numbers that encode to more than three bytes.

Elias Omega is a sexy algorithm. It's well thought out and utterly brilliant. But I wouldn't use it. It does well for tiny integers (under 8), but just doesn't cut the mustard for larger values - all other algorithms do better. Sorry Omega :-/.

Like Elias-Omega, this is a very interesting algorithm. However it's only really useful for small integers (less than 8). For bigger numbers it performs terribly.

I have a lot of respect for this algorithm. It's an all-rounder, doing well on small numbers and large alike. If you knew you were mostly going to have small numbers, but you'd have a some larger ones as well, this would be my choice. The algorithm is a little complex, so you might be cautious if you have extreme CPU limitations.

What about signed integers? These only support ulongs!

Indeed they do! There's a good reason for that - most times an integer is wanted to be compressed it's unsigned. And indeed it's not nearly as efficient to allow for signed integers unless it's really required. So by default these are all unsigned.

For those cases where you do want signed integers, convert it to unsigned using the ZigZag algorithm, like this:

And then pop the converted unsigned integer into the compression algorithm. When you're ready to decompress, use the ZigZag.Decode to reverse the effect.

In order to make an accurate assessment of a codec for your purpose, some algorithms have a method CalculateEncodedBits that allows you to know how many bits a given value would consume when encoded. I recommend getting a set of your data and running it through the CalculateEncodedBits methods of a few algorithms to see which one is best.

If your numbers are unsigned (eg, no negatives), be sure to use unsigned encoding. That way you'll get the best compression. Obviously fall back to signed if you must.

There are a few techniques you can use to further increase the compression of your integers. Following is a summary of each

Even with compression, smaller numbers use less space. So take a moment to consider what you can do to keep your numbers small. One common technique is to store the difference between numbers instead of the numbers themselves. Consider if you wanted to store the following sequence:

If you converted them to deltas you could instead store:

Naturally this isn't suitable for all contexts. If the receiver has the potential to loose state (eg. UDP transport) you'll have to include a recovery mechanism (eg keyframes), otherwise those deltas become meaningless.

Sometimes it's okay to loose data in compression. Let's say that you're compressing a list of distances in meters, however you only really care about the distance rounded to the nearest 100 meters. You can save a heap of data by dividing your value by 100 before compressing it, and multiplying it by 100 after.

Use a false floor

Sometimes all of your values are always going to be above zero. Let's say that you're storing the number of cars going over a busy bridge each hour. If it's safe to assume there will never be 0 cars you could save some data by subtracting one from your value before compression and adding one after decompression.

This may seem like a trivial optimization, however with most algorithms it will save you one or two bits per number. If you have several million numbers that really adds up.

The latest build is always on NuGet.