A convient wrapper for using the US Postal Service APIs in .NET and SOA environments.

The USPS Web APIs are an HTTP web service, however they rely on long strings of rudimentary XML as a parameter of the query in the target URL.

MeyerCorp.Usps uses a more traditional RESTful approach in most cases and exposes a Swagger endpoint.

This is a .NET Core library which contains actual translation of the REST inputs to the non-standard input of the USPS API. It also creates a NuGet package which allows the functionality to be included in other web application. This is available as a NuGet package.

This is a .NET Core console application which references the NuGet pagckage and shows how the basic Core library works. It is just a working sample.

This is a .NET Core Web API which allows the product to be configured and hosted like any .NET Core web app.

This is a collection of unit tests written in xunit. 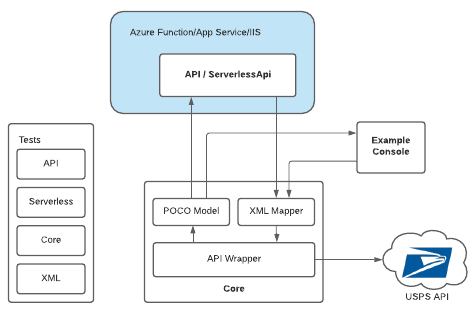 Use the various projects or just the NuGet package in the following ways:

Do not deploy as a service and allow consumers outside of your organization. If someone else in another organization needs a RESTful service, they can host their own deployment of this repository. After all, if the USPS would simply offer a RESTful-based API, this whole repo could be deprecated!

Using Usps.Core depends on your needs:

Merely install the MeyerCorp.Usps.Api NuGet package to add the controllers to your .NET Core Web project. You will then have the functionality available internally to the application as well as exposing it to your API consumers. Keep in mind that consumers will be using your API key. They cannot pass their own at this time.

Merely install the MeyerCorp.Usps.Core NuGet package to add the functionality to your .NET Core project. You will then have the functionality available internally to the application. Keep in mind that this will be using your one API key. You cannot pass in various keys at this time.

Hosting your own Web API:

Simply deploy the Api project to an Azure app service or an IIS server.

Simply deploy the Serverless project to an Azure Functions app.

This was originally written to add traditional REST endpoints to any Web API project. However, now I think it's better to host as a Azure Funtions project. This will allow your organization to be able easily access the USPS API w/o the non-traditional stacking of XML structures into the URL of the calls made to the USPS API. Do not expose this to any public users. If they need the functionality, they can go to USPS directly, or host their own service. Remember, this is a wrapper intended to expose the functionality of the USPS API in a more RESTful way.

This repo has sat dormant for some time as my original need disappeared and there was little interest. Recently, I decided to revive it making these significant changes:

The client project was originally a .NET Core SDK which allowed access to an instance of the Web API project. However, it became apparent to me that either you would want to run your own RESTful API to allow other languages and libraries like those used in SPAs. If you were writing in .NET, then just use the Core NuGet package.

I originally wrote this with a separate Web API controllers library so that any Web API project could suddenly have the capability of the Web API project itself, but I realized that goes against the grain of microservices and SOA in general.

I don't think any of this will have too much affect on anyone as no one really seems to be using this (including me) but if someone sees a need for this, I believe the updated architecture will be more helpful.

Break down into end to end tests

Please read CONTRIBUTING.md for details on our code of conduct, and the process for submitting pull requests to us.

See also the list of contributors who participated in this project.

This project is licensed under the MIT License - see the LICENSE.md file for details