Celebrate open source with us. Watch Upstream on demand.

Candela is a simple shell-building system that uses python and curses to help developers create customized command line interfaces. It has a simple interface, is well documented, and allows developers to take command-based tools to the next level of complexity and usability.

This is free software, and you are welcome to redistribute it under certain conditions. See the free software definition for details

There is an example shell project in shell_example.py. To run it, use

in a maximized terminal window. 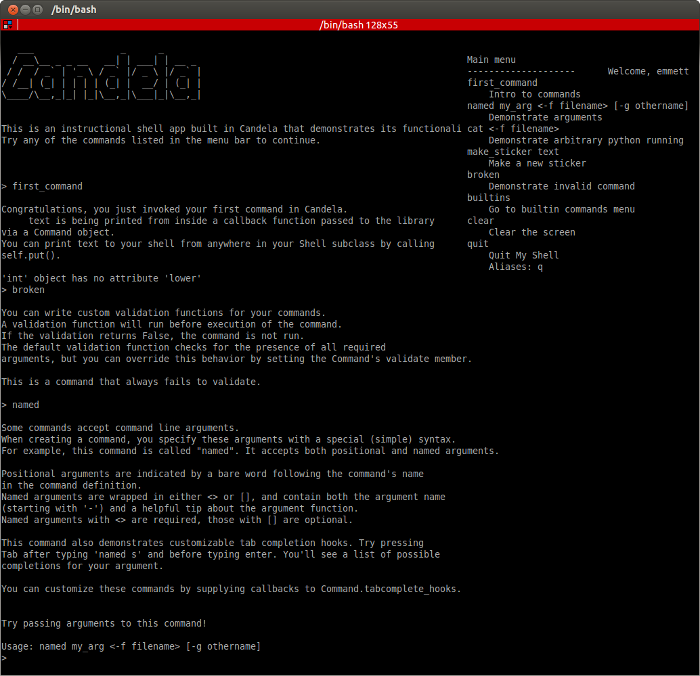 You can also clone this repo to take a closer look at the code and demo app.

Then, install the library with

First thing's first: if you really want to understand how to use Candela, read the code! There's a lot of documentation with code examples for the more complicated parts. A good starting point would be shell.py

Alternatively, you can simply import candela and reference the components with candela.shell.Shell, etc.

Every Candela app is built as a subclass of candela.shell.Shell. A Shell initialization follows this general outline:

Functions that execute on command invocation are modeled as python first-class functions (callbacks).

Once you've set up some commands and menus, you can create a runnable python script with your shell by using

Please see the shell example for a full walkthrough of how to use Candela. This example is both well-commented and an instructional app demonstrating Candela's features.

The name "Candela" was chosen after Spanish architect Felix Candela, who pioneered the technique of building shell-shaped structures out of reinforced concrete. He is sometimes known as the "shell builder".

If you need help using Candela, or have found a bug, please create an issue on the Github repo.