This project makes you to create a simple django project with Bootstrap 3 with minimal effort and with some common utils for you project.

Installing Django Bootstrap is pretty straight forward, but some requirements must be made to be able to use this project:

For future versions, the project will be Python 3.3+ compatible.

Some more requirements are also needed but are resolved on installed via pip, with the following command:

If you're installing with the targ.gz or zip distribution, you'll need to have these requirements installed in your python enviroment:

you can get them with the following command, after you have the project uncompressed:

Creating a project is pretty simple, just issue the following command on your shell:

This command will create a project with the name passed as parameter. If no name has been issued with the command, expect the following output with this error:

If the name of the project exists as a directory where you're issuing the command, expect the following output: 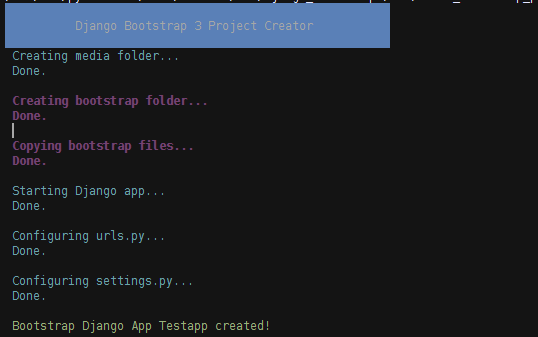 Base Model and extension

The boilerplate project comes with a Base Model class, with the following structure:

To be able to extend you models with these base class, just extend this base class as showed in the next example:

Service base class and extension

Service classes can be seen as classes that are between the model and the view and act like interfaces for a model class. For this, we have a base class for the services that will form part of the models.

To create a service class based on the base one, just follow the next example:

Special thanks to jmg for helping me with the development of this project.