A Python library for working with Free Rider HD Tracks.

Free Rider HD is an online HTML5 + JS game where users can draw bike tracks, upload them to a community of players, and ride them. (Go try it out!)

When drawing a track, you can import track code from a file or from your clipboard. This library (as of now) allows you to generate that code.

Fire up a terminal and run:

You should be good to go.

When you start, you’ll want to import frhdtools:

Next, you should create a Track class. This will hold all of your track’s objects and code.

Now that you’ve done that, you can add a line:

This will generate the code stored in my_track and print it to stdout.
In my case, the code was this:

Don’t worry what the code means just yet. First let’s plug it into FRHD to see if it works.

In the Track Editor, click “Import” at the top of the editor: 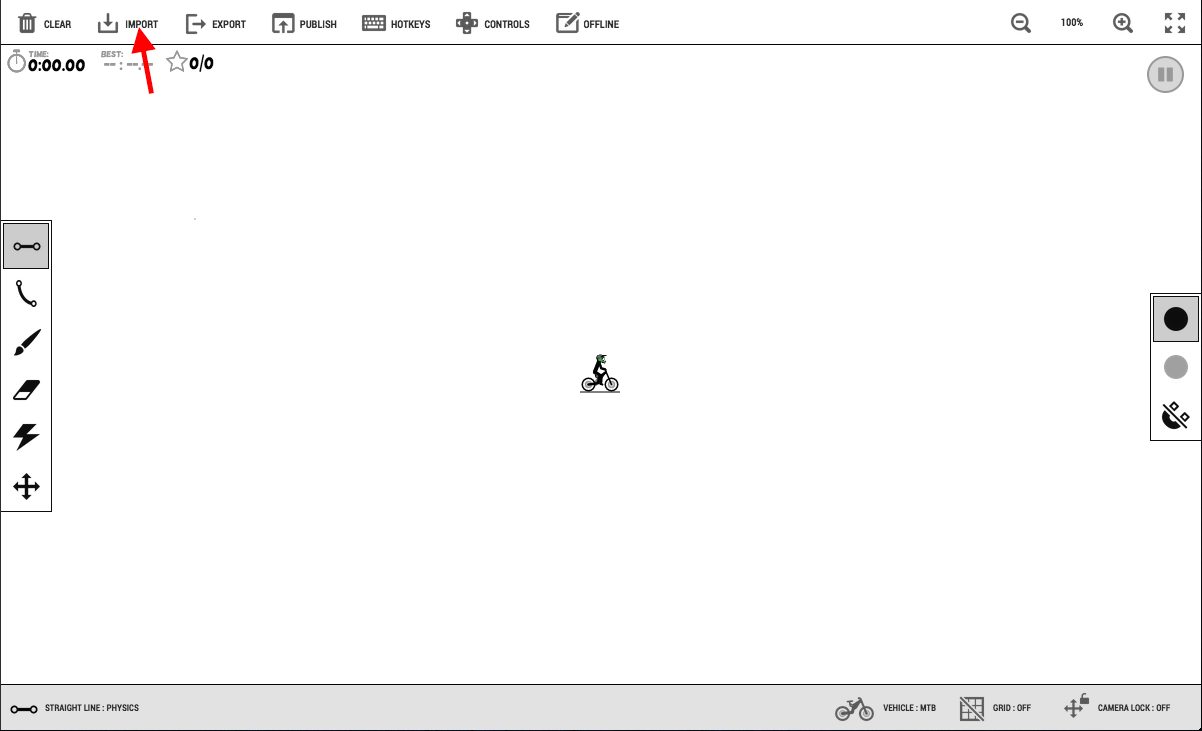 Then paste in your generated code at the window that pops up.

After it loads your file, the track should look exactly like this: 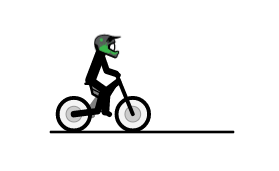 Congratulations! You’ve just finished you first line segment. It will get easier, I promise.

Remember how I mentioned that there were different types of lines? Well here’s what they are.

In the last example we used a physics line. The rider can interact and ride on those.

In this example you’ll make a scenery line. A scenery line is a line that the rider cannot ride on. It is purely just for scenery. Also, scenery lines are gray instead of black.

It’s really easy to make a scenery line. Instead of using the code from last time:

Now, when you plug the code into FRHD, you will get this:

Note: the rider will fall through the line as it does not have physics. This is normal.

Now you have made a scenery line. Great!

In this example, you will learn how to make a boost powerup.

To start, let's take our code from the first example:

Plug that into FRHD, and you're left with this:

In this example, you'll learn how to spawn a bomb powerup. Bombs explode when you touch them.

So, to get started we'll take our code from our first example and add my_track.insBomb():

That code makes a bomb at (90,10), which are the same coordinates from the last example.

Go ahead and put that into FRHD:

In this example, you'll put a gravity powerup into a track.

Gravity powerups are pretty cool because they can switch gravity. Wow.

You know the drill. Let's take the code from Example 1 and this time add my_track.insGravity():

Now, when you put that into FRHD, you'll see something cool:

Honestly, I think that this is one of the coolest features in FRHD; I really apprieciate that the developers took time to put it there.

Stars are items in the track that must be collected in order to complete the track.

Stars are added with my_track.insStar(x,y)

As you can see, stars have no physics and are collected immediately.

Slow motion is a cool feature that allows you to, in a nutshell, make it seem like your rider is riding in slow motion.