CLI time tracking software indented for use with JIRA

This is some time/task tracking software. It can talk (barely) to/at JIRA and Freshdesk. 🐑 PLEASELIKEANDSUBSCRIBE

Clone the source code and install with python3 -m pip install --user -e .[jira,freshdesk]. If you want. You don't have to. I'm not the police.

The data is stored in a sqlite3 database at ~/.local/share/impetuous/data.sqlite. This can be overridden by setting IM_DB.

im show will list time entries. It uses --since and --until to filter on entries to show. By default, that range is today. Sometimes it's nice to look at yesterday, so you can pass -y or --yesterday for that. You can provide -y multiple times to keep going back. These time range options should be given after im and before the action (such as doing or show).

--yesterday works by moving back the dates (given and default) for --since and --until and --when for im doing.

Many actions can do dry runs with --dry-run.

When all else fails, use im edit to open a YAML representation of your time entries in EDITOR. Like im show, this only shows entries filtered by --yesterday, --since, and --until.

im post will post your time entries to an external service you have configured. The responses are saved in the database, so impetuous will remember the result and won't double-post if you run im post again. 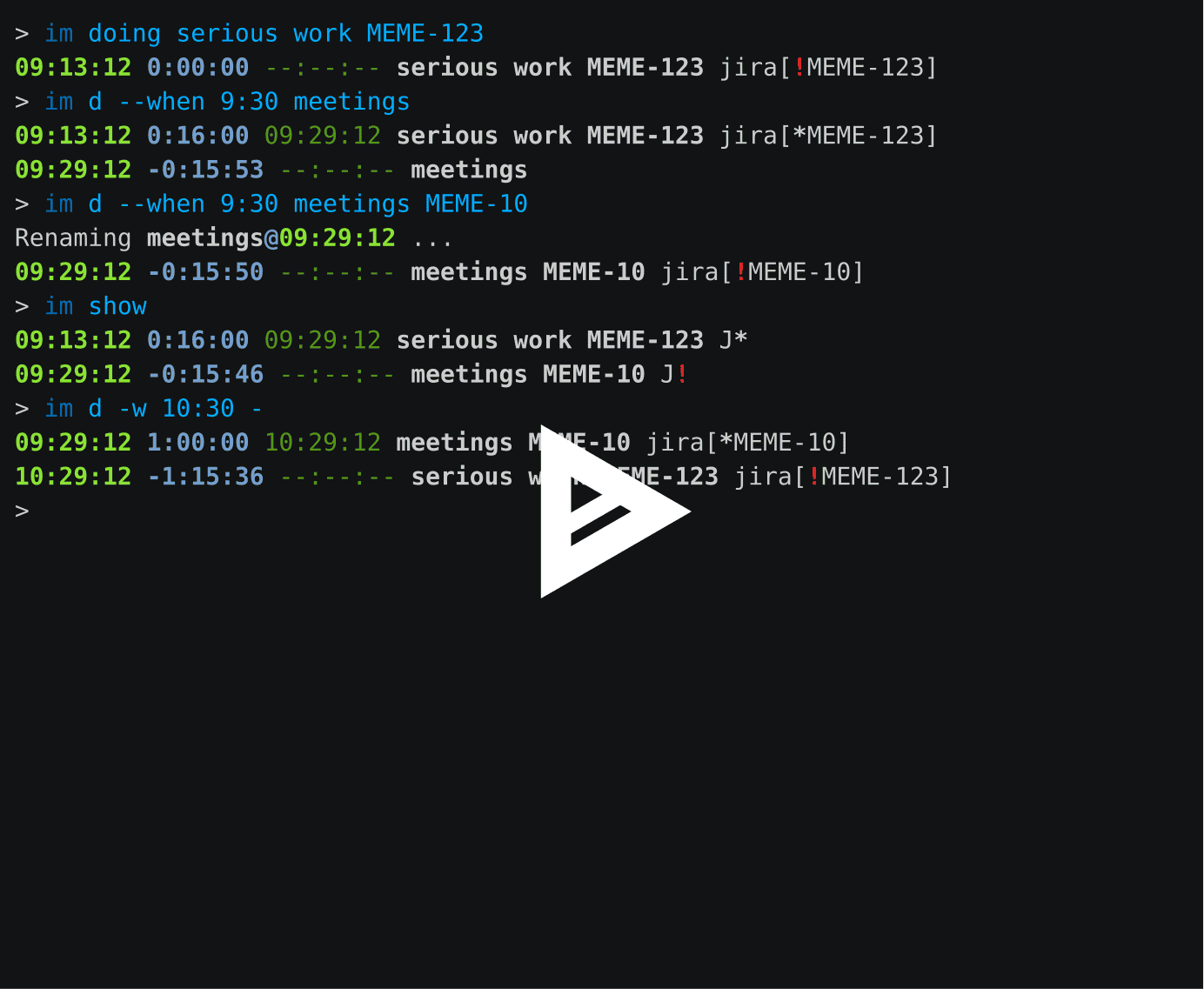 Configuration and JIRA and Freshdesk

The section names are written into the database and used to track entry postings. If you change the section names, it'll mess everything up. So don't do it.

Each section defines an external service for logging time against. The api determines how we can talk to it. You can add multiple sections and call them whatever you want.

By default, the name and abbreviated name are taken from the section name, but you can set them as shown in the "freshdesk" section above.

You can use im encode to get impetuous to encode your passwords in the configuration file. Then it decodes them when it uses them. It supports a few different encodings. You can encode it multiple times. I don't know why you want to use this. But it's there now.

This project does not follow semantic versioning yet as it doesn't have anything considered to have a public API. The version numbers are entirely arbitrary and meaningless, just like everything else in life.

You actually only need to do step 4 and 5 to run the program with localization if you don't want to make modifications.