An 8x8 grid of virtual LEDs implemented in Pygame.

The ledgrid module contains a single LEDGrid class which aims to be as identical as possible to the public interface of the Raspberry Pi Sense HAT library, such that it is useful in mocking up software for it and other such devices. 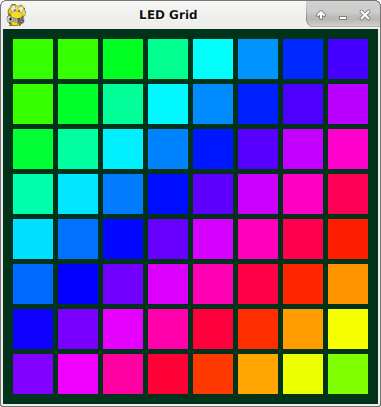 However, the internal implementation is rather simplified and uses pygame instead of the hardware HAT.

It requires pygame to be installed (not currently available through pypi), an additional optional dependency is PIL (i.e. Pillow) which is required by some features (notably scrolling text with the show_message method).

It supports every Python version since 2.7. It is contained in only one Python file, so it can be easily copied into your project if you don't want to use pypi. (The copyright and license notice must be retained.)

At the bottom of the ledgrid.py file are some examples of usage. You can run these examples using:

Or if you have the file locally:

Many thanks to Richard Hayler. The LED class, graphics, etc are based on his 8x8GridDraw.