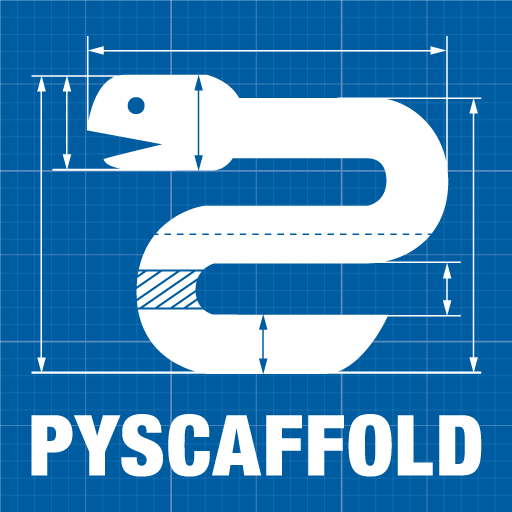 PyScaffold is a project generator for bootstrapping high quality Python packages, ready to be shared on PyPI and installable via pip. It is easy to use and encourages the adoption of the best tools and practices of the Python ecosystem, helping you and your team to stay sane, happy and productive. The best part? It is stable and has been used by thousands of developers for over half a decade!

Checkout out this demo project, which was set up using PyScaffold and if you are still not convinced yet, also have a look at these reasons to use PyScaffold.

NOTE - This document refers to the latest version of PyScaffold (v4). Please refer to v3.3 for the previous stable version.

If you want to install all PyScaffold's extensions you can even:

(More details of each method are available in the installation docs)

After the installation, a new putup command will be available and you can just type:

This will create a new folder called my_project containing a perfect project template with everything you need for some serious coding.

After cd-ing into your new project and creating (or activating) an isolated development environment (with virtualenv, conda or your preferred tool), you can do the usual editable install:

We also recommend using tox, so you can take advantage of the automation tasks we have setup for you, like:

The following figure demonstrates the usage of putup with the new experimental interactive mode for setting up a simple project. It uses the --cirrus flag to add CI support (via Cirrus CI), and tox to run automated project tasks like building a package file for distribution (or publishing).

Type putup -h to learn about more configuration options. PyScaffold assumes that you have Git installed and set up on your PC, meaning at least your name and email are configured.

The project template provides you with following features:

All configuration can be done in setup.cfg like changing the description, URL, classifiers, installation requirements and so on as defined by setuptools. That means in most cases it is not necessary to tamper with setup.py.

In order to build a source or wheel distribution, just run tox -e build (if you don't use tox, you can also install build and run python -m build).

Additional data, e.g. images and text files, that reside within your package and are tracked by Git will automatically be included if include_package_data = True in setup.cfg. It is not necessary to have a MANIFEST.in file for this to work.

Note that the include_package_data option in setup.cfg is only guaranteed to be read when creating a wheels distribution. Other distribution methods might behave unexpectedly (e.g. always including data files even when include_package_data = False). Therefore, the best option if you want to have data files in your repository but not as part of the pip installable package is to add them somewhere outside the src directory (e.g. a files directory in the root of the project, or inside tests if you use them for checks). Additionally you can exclude them explicitly via the [options.packages.find] exclude option in setup.cfg.

Your project is an already initialised Git repository and uses the information of tags to infer the version of your project with the help of setuptools_scm. To use this feature, you need to tag with the format MAJOR.MINOR[.PATCH] , e.g. 0.0.1 or 0.1. .. Run python -m setuptools_scm to retrieve the current PEP440-compliant version. This version will be used when building a package and is also accessible through my_project.__version__.

Unleash the power of Git by using its pre-commit hooks. This feature is available through the --pre-commit flag. After your project's scaffold was generated, make sure pre-commit is installed, e.g. pip install pre-commit, then just run pre-commit install.

A default .gitignore file is also provided; it is well adjusted for Python projects and the most common tools.

The Numpy and Google style docstrings are activated by default.

If you have tox in your system, simply run tox -e docs or tox -e doctests to compile the docs or run the doctests.

PyScaffold relies on pytest to run all automated tests defined in the subfolder tests. Some sane default flags for pytest are already defined in the [tool:pytest] section of setup.cfg. The pytest plugin pytest-cov is used to automatically generate a coverage report. It is also possible to provide additional parameters and flags on the commandline, e.g., type:

to show the help of pytest (requires pytest to be installed in your system or virtualenv).

Projects generated with PyScaffold by default support running tests via tox, a virtualenv management and test tool, which is very handy. If you run:

in the root of your project, tox will download its dependencies, build the package, install it in a virtualenv and run the tests using pytest, so you are sure everything is properly tested.

For usage with a continuous integration software JUnit and Coverage XML output can be activated in setup.cfg. Use the flag --cirrus to generate templates of the Cirrus CI configuration file .cirrus.yml which even features the coverage and stats system Coveralls.

Installation requirements of your project can be defined inside setup.cfg, e.g. install_requires = numpy; scipy. To avoid package dependency problems it is common to not pin installation requirements to any specific version, although minimum versions, e.g. sphinx>=1.3, and/or maximum versions, e.g. pandas<0.12, are used frequently in accordance with semantic versioning.

All licenses from choosealicense.com can be easily selected with the help of the --license flag.

Find more extensions within the PyScaffold organisation and consider contributing your own, it is very easy! You can quickly generate a template for your extension with the --custom-extension option after having installed pyscaffoldext-custom-extension.

All extensions can easily be installed with pip install pyscaffoldext-NAME.

Keep your project's scaffold up-to-date by applying putup --update my_project when a new version of PyScaffold was released. An update will only overwrite files that are not often altered by users like setup.py. To update all files use --update --force. An existing project that was not setup with PyScaffold can be converted with putup --force existing_project. The force option is completely safe to use since the git repository of the existing project is not touched!