The simplest way to write one program that runs on both Python 2 and Python 3. 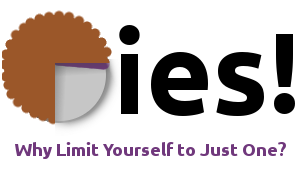 The simplest (and tastiest) way to write one program that runs on both Python 2.6+ and Python 3.

or if you prefer:

Pies is a Python2 & 3 Compatibility layer with the philosophy that all code should be Python3 code. Starting from this viewpoint means that when running on Python3 pies adds virtually no overhead.

Instead of providing a bunch of custom methods (leading to Python code that looks out of place on any version) pies aims to back port as many of the Python3 api calls, imports, and objects to Python2 - Relying on special syntax only when absolutely necessary.

How does pies differ from six?

Pies is significantly smaller and simpler than six because it assumes for everything possible the developer is using the Python 3 compatible versions included with Python 2.6+, whereas six tries to maintain compatibility with Python 2.4 - leading to many more overrides and further into different language territory. Additionally, as stated above, where possible pies tries to enable you to not have to change syntax at all.

Integrating pies into your diet

Using and integrating pies into an existing Python 3+ code base (to achieve Python 2 & 3 dual support) couldn't be simpler:

Some Python3 Modules have moved around so much compared to their Python2 counterpart, that I found it necessary to create special versions of them to obtain the Python3 naming on both environments. Since these modules exist already in Python2 allowing them to be imported by the Python3 module name directly is not possible. Instead, you must import these modules from pies.

Sadly, there is still special syntax that is present for corner cases.

What Could be Improved?

I'm pretty sure a bunch. If you run into any problems or have any ideas please don't hesitate to file a bug, submit a pull request, or email me at timothy.crosley@gmail.com.

Thanks and I hope you enjoy pies!