a python3 to pseudo compiler

Pseudo is a framework for high level code generation: it is used by this compiler to translate a subset of Python to all Pseudo-supported languages

If you are using Python3.5 and you experience problems with an already installed version of pseudo-python, please upgrade it to 0.2.32 (pip3 install pseudo-python --upgrade)

Pseudo defines a language-independent AST model and an unified standard library. It can map its own standard library to target language libraries and concepts automatically and it tries to generate readable and idiomatic code.

Pseudo-Python translates a subset of Python to Pseudo AST and then it receives the JS/Ruby/C#/Go backends for free. (+ at least 4-5 backends in the future)

etc for all the supported pseudo targets (javascript, c#, go, ruby and python)

Each example contains a detailed README and working translations to Python, JS, Ruby, Go and C#, generated by Pseudo

a verbal expressions-like library ported to all the target languages

A lot of work has been put into making pseudo-python error messages as clear and helpful as possible: they show the offending snippet of code and often they offer suggestions, list possible fixes or right/wrong ways to write something 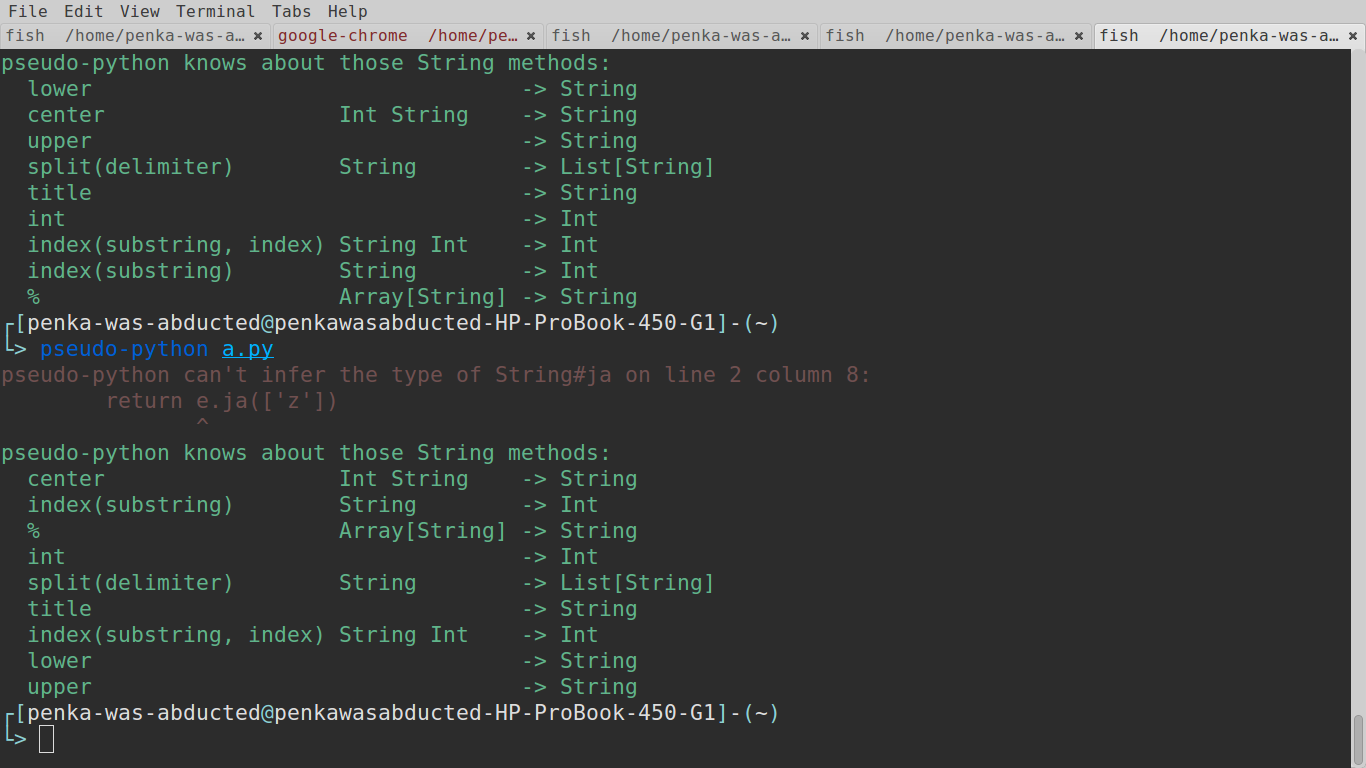 Beware, pseudo and especially pseudo-python are still in early stage, so if there is anything weird going on, don't hesitate to submit an issue

pseudo-python checks if your program is using a valid pseudo-translatable subset of Python, type checks it according to pseudo type rules and then generates a pseudo ast and passes it to pseudo for code generation.

The rules are relatively simple: currently pseudo-python infers everything from the usage of functions/classes, so has sufficient information when the program is calling/initializing all of its functions/classes (except for no-arg functions)

Often you don't really need to do that for all of them, you just need to do it in a way that can create call graphs covering all of them (e.g. often you'll have a calling b calling x and you only need to have an a invocation in your source)

Beware, you can't just annotate one param, if you provide type annotations for a function/method, pseudo-python expects type hints for all params and a return type

Variables can't change their types, the equivalents for builtin types are

There are several limitations which will probably be fixed in v0.3

If you initialize a variable/do first call to a function with a collection literal, it should have at least one element(that limitation will be until v0.3)

The easiest way to play with the type system is to just try several programs: pseudo-python errors should be enough to guide you, if not, you can always open an issue

How does Pseudo work?

The implementation goal is to make the definitions of new supported languages really clear and simple.

If you dive in, you'll find out a lot of the code/api transformations are defined using a declarative dsl with rare ocassions of edge case handling helpers.

That has a lot of advantages:

However language translation is related to a lot of details and a lot of little gotchas, tuning and refining some of them took days. Pseudo uses different abstractions to streamline the process and to reuse logic across languages.

What's the difference between Pseudo and Haxe?

They might seem comparable at a first glance, but they have completely different goals.

Pseudo wants to generate readable code, ideally something that looks like a human wrote it/ported it

Pseudo doesn't use a target language runtime, it uses the target language standard library for everything (except for JS, but even there is uses lodash which is pretty popular and standard)

Pseudo's goal is to help with automated translation for cases like algorithm generation, parser generation, refactoring, porting codebases etc. The fact that you can write compilers targetting Pseudo and receiver translation to many languages for free is just a happy accident

Distributed under the MIT License.