A method for identifying hierarchical orthogroups among homologous sequences

'Orthology' is a term that was coined to describe 'homology via speciation'¹, which is now a concept broadly used as a predictor of shared gene function among species²⁻³. From a systematics perspective, orthology also represents a natural schema for classifying/naming genes coherently. As we move into the foreseeable future, when the genomes of all species on the planet have been sequences, it will be important to catalog the evolutionary history of all genes and label them in a rational way. Considerable effort has been made to programmatically identify orthologs, leading to excellent software solutions and several large public databases for genome-scale predictions. What is currently missing, however, is a convenient method for fine-grained analysis of specific gene families.

In essence, RD-MCL is an extension of conventional Markov clustering-based orthogroup prediction algorithms like OrthoMCL, with three key differences:

RD-MCL is hosted on the Python Package Index, so the easiest way to get the software and most dependencies is via pip:

The program will complain if you don't run '-setup' before the first time you use it, so make sure you do that.

The input for RD-MCL is a sequence file in any of the many supported formats, where the name of each sequence is prefixed with an organism identifier. For example:

The above is a few sequences from KOG0001, coming from Arabidopsis (ath), C. Elgans (cel), Human (hsa), and yeast (sce). Note the hyphen (-) separating each identifier from the gene name. This is important! Make sure there are no spurious hyphens in any of the gene names, and if you can't use a hyphen for some reason, set the delimiting character with the -ts flag.

Once you have your sequences named correctly, simply pass it into rdmcl:

A new directory will be created which will contain all of the accoutrement associated with the run, including a 'final_clusters.txt' file, which is the result you'll probably be most interested in.

There are several parameters you can modify; use :$ rdmcl -h to get a listing of them. They are also individually described in the wiki. 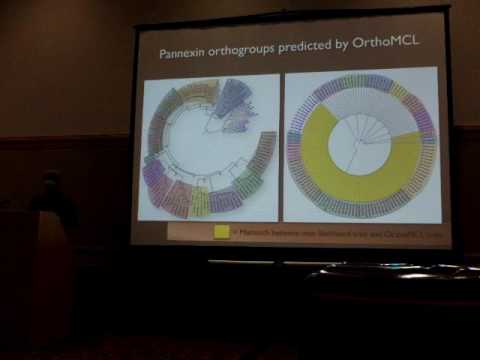 Distributing RD-MCL on a cluster

RD-MCL will parallelize creation of all-by-all graphs while searching MCL parameter space. Once a graph has been created it is saved in a database, thus preventing repetition of the 'hard' work if/when the same cluster is identified again at a later time. This means that the computational burden of a given run will tend to be high at the beginning of that run and decrease with time.

To spread the work out across multiple nodes during the 'hard' part, launch workers with the launch_worker script bundled with RD-MCL:

By default, launch_worker will use all of the cores it can find, so either sequester the entire node or pass in the --max_cpus flag to restrict it. I have run as many as 100 workers at a time, but be aware that this sort of pressure can lead to some instability (i.e., lost jobs from the queue and frozen master threads). Twenty workers is usually safe.

Next, launch RD-MCL with the --workdb flag set to the same path you specified for launch_worker:

RD-MCL will now send its expensive all-by-all work to a queue and wait around for one of the workers to do the calculations. You can keep track of how busy the workers are by running the monitor script in the same directory as the workers:

Also, you can send an arbitrary number of RD-MCL jobs to the same worker pool, no problem.

If you have any comments, suggestions, or concerns, feel free to create an issue in the issue tracker or to get in touch with me directly at steve.bond@nih.gov