Tachikoma is an alerting pipeline so smart it's scary 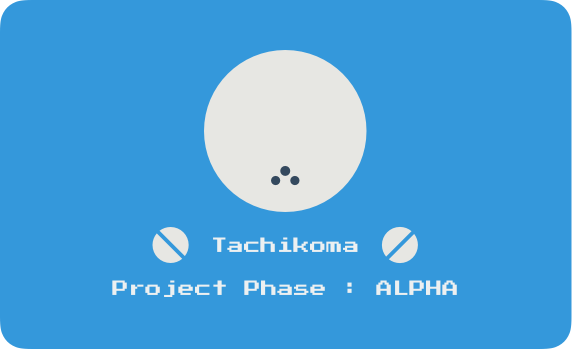 Security robots so smart it's concerning.

Tachikoma is the alerting and analysis pipeline we've always wanted, but could never seem to find. It's inspired by projects like Security Monkey, but attempts to fix what we feel are a number of shortcomings in other platforms.

Tachikoma operates on the concept of a 3-phase pipeline, which provides a nice separation of concerns and decouples your logic for retrieving security-relevant data, processing found results, and emitting alerts to 3rd party services (like email or Slack). This makes for much easier testing and readability, while providing good flexibility to analyze and alert on almost anything without going crazy.

Right now it's designed to run in a batch processing mode, so you'd run your Tachikoma pipeline at some fixed interval (like once an hour). Eventually we're going to support real-time pipelines, so you can ingest data from live data sources (like websockets) and use that for triggering alerts as things happen.

The general workflow of Tachikoma breaks down into 3 major components, generators, analyzers, and emitters. 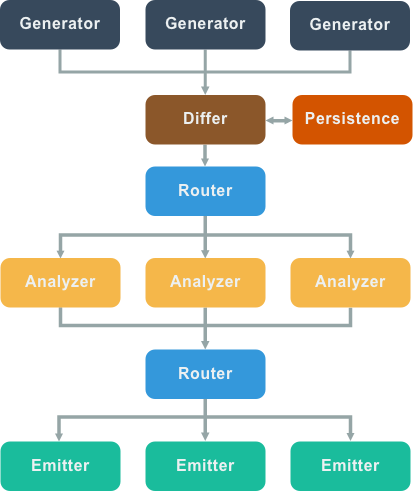 It's worth noting there is some extra processing happening behind the scenes (in the form of a differs, routers, and a persistence mechanism), but usually you don't have to concern yourself with it, and you can focus mostly ingesting data, processing it, alerting on it, and moving on with your life.

A generator's job is simple - it just generates data. The data can come from anywhere, but the idea is that it should generate the same data as long as nothing has changed in whatever data source you want to monitor. A good example of this concept is a generator tasked with watching the slack users for a given organization - the generator generating the list of users will be the exact same every time until a new user is added, or a user is removed.

Generators can be either coroutines (decorated with @asyncio.coroutine or prefixed with the async keyword) or regular functions. If a regular function is used, it will be executed concurrently in a threadpool, so make sure your generators are thread safe!

This is an extremely handy thing to have done generically and behind the scenes as it makes writing the logic for the analyzers quite easy. For example, if you were monitoring your AWS IAM users for any account additions, it'd be a simple matter of interrogating the diff information passed into your analyzer and emitting based only on that.

The persistence layer is meant to be a very simple interface with purpose-built functions abstracting away the implementation of how the results are stored, and instead focuses on more to-the-point storage and retrieval.

There are a number of persistence mechanisms already included with Tachikoma, but it's trivial to implement your own and back Tachikoma with whatever storage medium you want!

The routing layer is used in two places - to route generated data to the analyzers, and to route analyzer results to emitters. This routing layer is based on a very simple namespacing concept, so while generators have specific names (aws.iam, slack.users, etc), analyzers and emitters are associated with namespaces.

For example, when setting up the pipeline you may have a generator named aws.iam, and an analyzer listening in the aws.* namespace. The analyzer would receive data from any generator prefixed with the aws key, so it would receive the aws.ian results for analysis. The same idea goes for emitters, and the emitter namespaces and analyzer namespaces are decoupled, so you can do cool things like have one analyzer for all aws services, but have specific emitters for specific services.

Analyzers hold true to their namesake and analyze results coming in from the generator layer (after being diffed by the diffing engine), and receive 4 basic things - the generator's previous results, the generator's current results, a diffing data structure that holds the differences in the results, and a reference to the global shared state.

Each analyzer is responsible for analyzing their result and emitting a generic message (with a title, description, and optional extra metadata), which will then be used by the emitting layer to send properly formatted data to each service that's registered for that namespace.

Emitters are the final stop in the pipeline lifecycle, and are responsible for interacting with external services to do things like publish results to an SNS topic, send emails, or trigger a GET request to a specific service.

At Cali Dog we put out OSS projects in a 4-phase release cycle:

The project is currently in the ALPHA phase, so it's getting there, but expect some breakage and minimal integrations!