Note-taking app for writing your diary in the terminal

terminal-diary is an easy-to-use, note-taking and diary app that lets you take notes in the terminal with your favorite text editor. It can render pdfs of your notes scattered across multiple days using pandoc (supports Markdown, LaTeX, HTML ..etc). It is written completely in Python, so that it is highly-customizable. Feel free to fork and customize your own settings.

The note command lets you jot down notes. All the notes written on the same day gets stored in the same text file, but you specify keyword tags so that it is easier to organize them later.

The organize command compiles all your note files from multiple days into relevant categories based on your keyword tag. There's two formatting modes:diary (which contains timestamps of each record) and notes (no timestamps). While a markdown file of the notes is always generated with organize, you can also optionally generate the pdf.

For quick reference of recent notes on terminal (No Pdf): organize ML notes

Sometimes I forget which keyword tags I've used for a subject keyword (Was it ML or machine_learning or machine-learning?). You can use the iforgot command to print a list of all the keywords that you've ever used, so that they'll all get sorted together.

The syncup command allows you to generate the most up to date notes based on your diary files. This might take a while to run, but you get nice pretty pdf notes of everything afterwards.

The diary command is used for writing diaries that are stored separately from your research diaries. By default, it saves it into a folder called diary.noindex, the .noindex prevents Mac from indexing it in the Spotlight search. 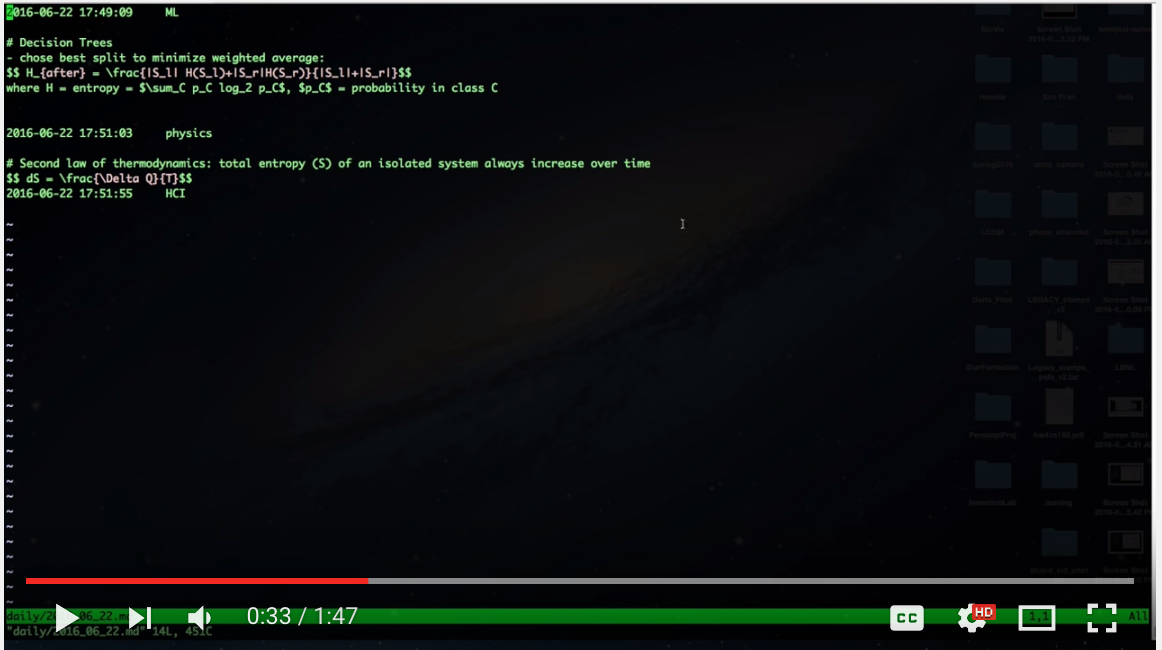 I've also set up a web-app interface to the display the diary entries record by terminal-diary. The code on the master branch is the terminal-only version code, switch to the web branch of this repo in order to use the web interface. The web diary option specified as WEB_LOCpath during installation. (If WEB_LOC is not specified, default mode doesn't contain the web-app mode ) The web-app runs on Jekyll and is based on Victor Hugo's space-jekyll. The Github repo for the web-diary is here.

I have tried using a lot of different note-taking software in the past, but there was always a couple things that I didn't like each one of them, features that one had, but not in the other (See Wikipedia's comparison of notetaking software ). So about half a year ago, I decided to build my own from scratch, so that I can just build the features that I wanted. Part of making this open source is so that there's a basic framework that you can hack around to build your own plug-in scripts for customizing your own functionalities.

Another cool thing about terminal-notes is that it has enabled me to collect a fairly comprehensive, digital records of my research notes for text-mining purposes. Using very crude and basic natural language processing tricks and statistics, my next goal is to make periodic visualizations that can let me keep track of how my interest shifts in time, which would be kind cool to look at. (Here's a snippet of the preliminary Wordcloud example) I'm excited to see the potential application space from mining personal text corpus data collected by terminal-diary (sentiment analysis on your diary records?).