Weld is a runtime and language for accelerating data analytics frameworks

Weld is a language and runtime for improving the performance of data-intensive applications. It optimizes across libraries and functions by expressing the core computations in libraries using a common intermediate representation, and optimizing across each framework.

Modern analytics applications combine multiple functions from different libraries and frameworks to build complex workflows. Even though individual functions can achieve high performance in isolation, the performance of the combined workflow is often an order of magnitude below hardware limits due to extensive data movement across the functions. Weld’s take on solving this problem is to lazily build up a computation for the entire workflow, and then optimizing and evaluating it only when a result is needed.

To install Rust, follow the steps here. You can verify that Rust was installed correctly on your system by typing rustc into your shell.

To install LLVM on macOS, first install Homebrew. Then:

Weld's dependencies require llvm-config, so you may need to create a symbolic link so the correct llvm-config is picked up (note that you might need to add sudo at the start of this command):

To make sure this worked correctly, run llvm-config --version. You should see 3.8.x or newer.

Enter the weld_rt/cpp directory and try running make. If the command fails with errors related to missing header files, you may need to install XCode and/or XCode Command Line Tools. Run xcode-select --install to do this.

To install LLVM on Ubuntu :

Weld's dependencies require llvm-config, so you may need to create a symbolic link so the correct llvm-config is picked up:

To make sure this worked correctly, run llvm-config --version. You should see 3.8.x or newer.

With LLVM and Rust installed, you can build Weld. Clone this repository, set the WELD_HOME environment variable, and build using cargo:

Note: If you are using a version of LLVM newer than 3.8, you will have to change the llvm-sys crate dependency in easy_ll/Cargo.toml to match (e.g. 40.0.0 for LLVM 4.0.0). You may also need to create additional symlinks for some packages that omit the version suffix when installing the latest version, e.g. for LLVM 4.0:

The docs/ directory contains documentation for the different components of Weld.

Weld's Python bindings are in python/weld, with examples in examples/python.

cargo test runs unit and integration tests. A test name substring filter can be used to run a subset of the tests:

This repository contains a number of useful command line tools which are built automatically with the main Weld repository, including an interactive REPL for inspecting and debugging programs. More information on those tools can be found under docs/tools.md. 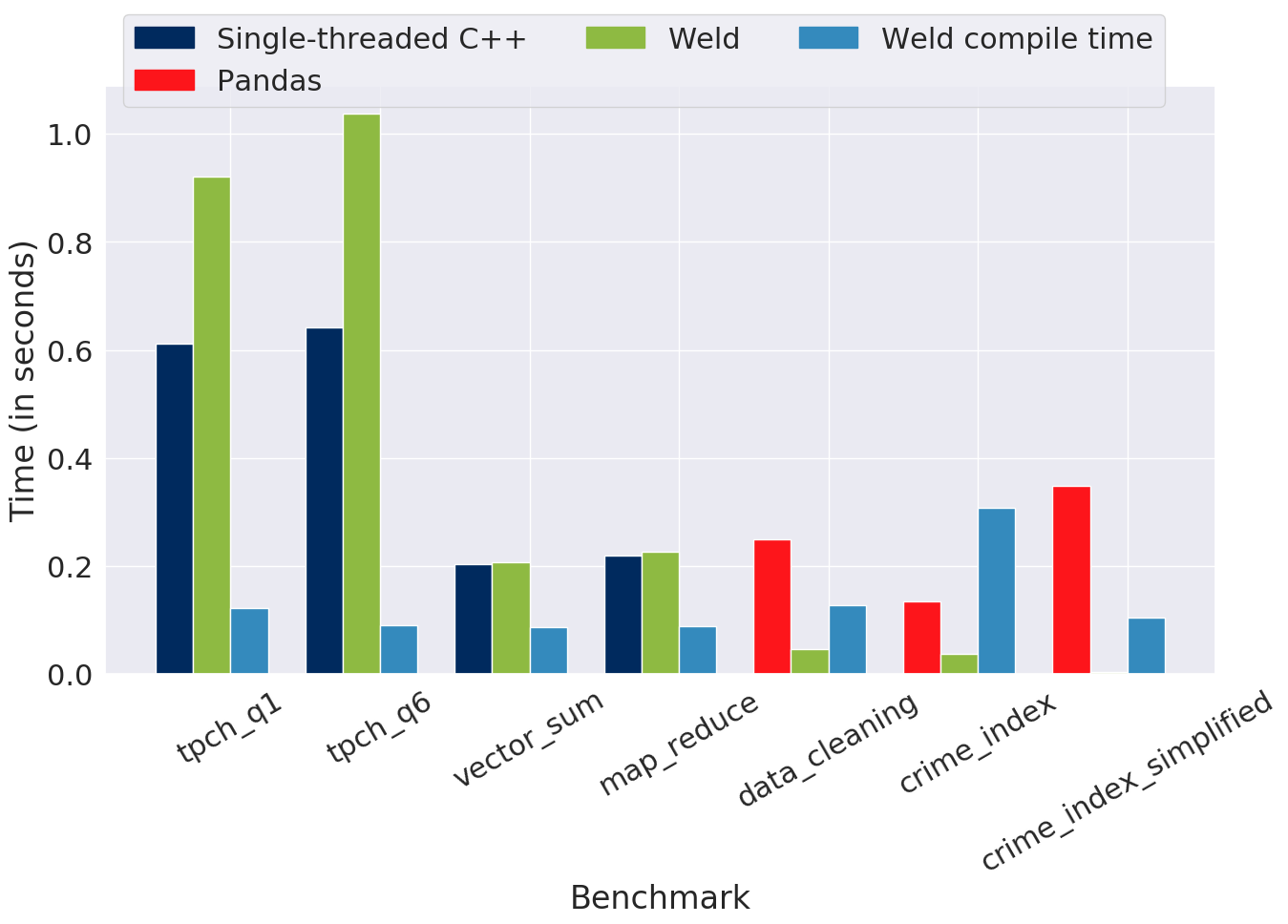