The post-translational modifications in yMap are collected from different repositories like UniProt and sources with annotated PTMs like PTMcode 2.0 and PTMfunc, for more details, see below.

In a user friendly three steps, it generates a "final-report" file to report all the non-synonymous mutations that overlaps or falls inside the above mentioned proteins functional regions. The final-report is complemented with two other files; enrichment and visualisation id file 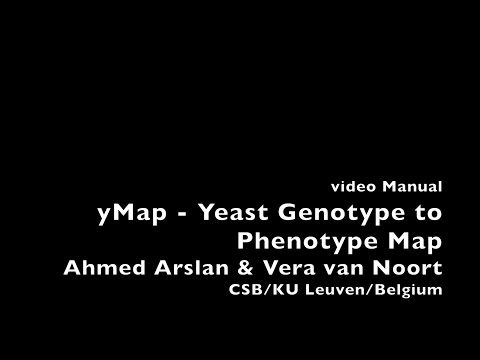 *To run from source code:

(i) Raw files downloaded from UniProt and stored in the present dir.by executing step2.

9 - uniprot_bioGrid.txt # contains all the yeast proteins with BioGrid ids

(ii) Processed data from UniProt and other resources by executing step2.

A number of files germinated from the original UniProt file for further analyses:

d_id_map.txt
contains protein domains with all the ids

id_nucleotide.txt
contains data from nucleotide with all the protein ids for processing

Introduction to all the methods

NOTE: change the name of the mutations containing file to ‘mutated_proteins.txt’ (see example data) and copy to the cd path/to/ymap

pmap()
if proteins ids are not SDG or uniprot or common names, this method maps the ids

bioGrid()
Downloads BioGrid ids of yeast proteins from UniProt for further processing including mapping and web browsing WARNING: requires powerful machines to work with as its expensive to open in machines with low memory.

pdb() This code maps mutations to the proteins structural regions

interface() PTM present at the interface of two proteins and known to play role in interaction (Beltrao et al. Cell 2012)

ppi() PTM present at the interface of two proteins and known to play role in interaction (Beltrao et al. Cell 2012)

1 - The files of annotated PTMs are missing or less them nine.

“IndexError: string index out of range”

2(b) - The same reason (below) leads to the unsuccessful mapping of mutations to different functional regions like domains:

Reason: the mutations positions fall outside the start and end of the respective proteins (NOTE: to analyse the proteins in starting file with correct mutation positions, user can use individual methods uniprot_data() and functional_data(), to get all the analyses done, than execute the command-line step3)

how to correct: Look at the positions of mutations and compare them manually if they correspond to start and end positions of a protein, if not, correct the problem and re-run $ ygenes command.

3 - yweb fails to locate the directory.

This work in supported by KU Leuven research fund.