A lightweight tool for running your tests fast.

QA is a lightweight tool for running your tests fast. 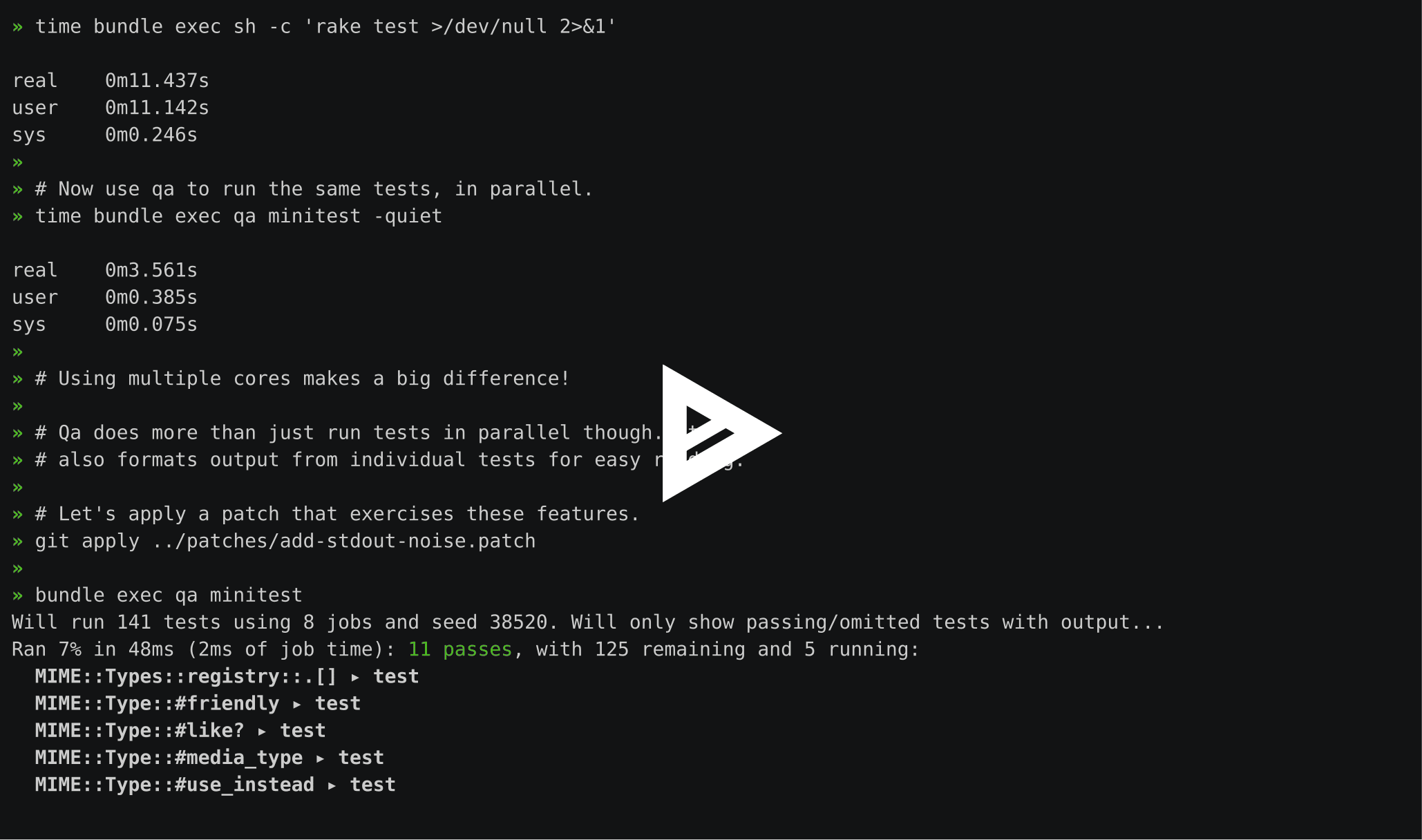 What can QA help me do today?

What languages and test frameworks does QA support?

Be sure to use bundle exec when you run qa, if you're managing dependencies with Bundler. For example, if you're using Rspec:

What will QA help me do tomorrow?

Getting started with QA

Starting with the 0.18 release, QA is now only available as the qa-tool gem. You can add 'qa-tool' to your gem's development dependencies, or add the following to your Gemfile:

Don't forget to run bundle install after editing your Gemfile!

See below for an example usage.

How to use QA to run your tests

Since QA is still in alpha, there are a number of rough edges.

If qa seems to be acting strangely and isn't providing a reasonable error message, you may be experiencing a bug relating to swallowed error output. This is tied to QA's stdout and stderr capture logic. Adding the -capture-standard-fds=false option will disable the capture logic and should allow the original error to bubble up. Please open an issue with the error output.

What are flaky tests?

For a fast moving software team, automated tests are the last line of defense against shipping broken software to customers. But there's a dirty little secret in the world of automated testing: flaky tests. A flaky test fails intermittently with some (apparently random) probability. A flaky test doesn't care that it just passed 9 times in a row. On the 10th run, it will relish the chance to slowly drain your team's sanity.

Flaky tests sap your confidence in the rest of your tests. Their existence robs you of the peace of mind from seeing a test's "PASS" status. Every team has to battle flaky tests at some point, and few succeed in keeping them at bay. In fact, flakiness may wear you down to the point where you re-run a failed test, hoping that "MAYBE it is just flaky". Or worse, you comment it out, and suffer a customer-facing bug that would have been covered by the test!

So that's the bad news: by their very nature, flaky tests are hard to avoid. In many cases they start out looking like healthy tests. But when running on a machine under heavy load, they rear their ugly, randomly failing heads. In some cases they may only fail when the network is saturated. (Which is a reason to avoid tests that rely on third party services in the first place.) Or the opposite could happen: you upgrade a dependency or language runtime to a faster version, and this speeds up the testrun enough to unveil latent flakiness you never recognized. Such are the perverse economics of flaky tests.

How do I use QA to detect flaky tests?

To analyze the last few days worth of test results, you can use the qa flaky command. It's important to use the same value for QA_ARCHIVE (or -archive) as given to other qa commands. For example, continuing the session from above: 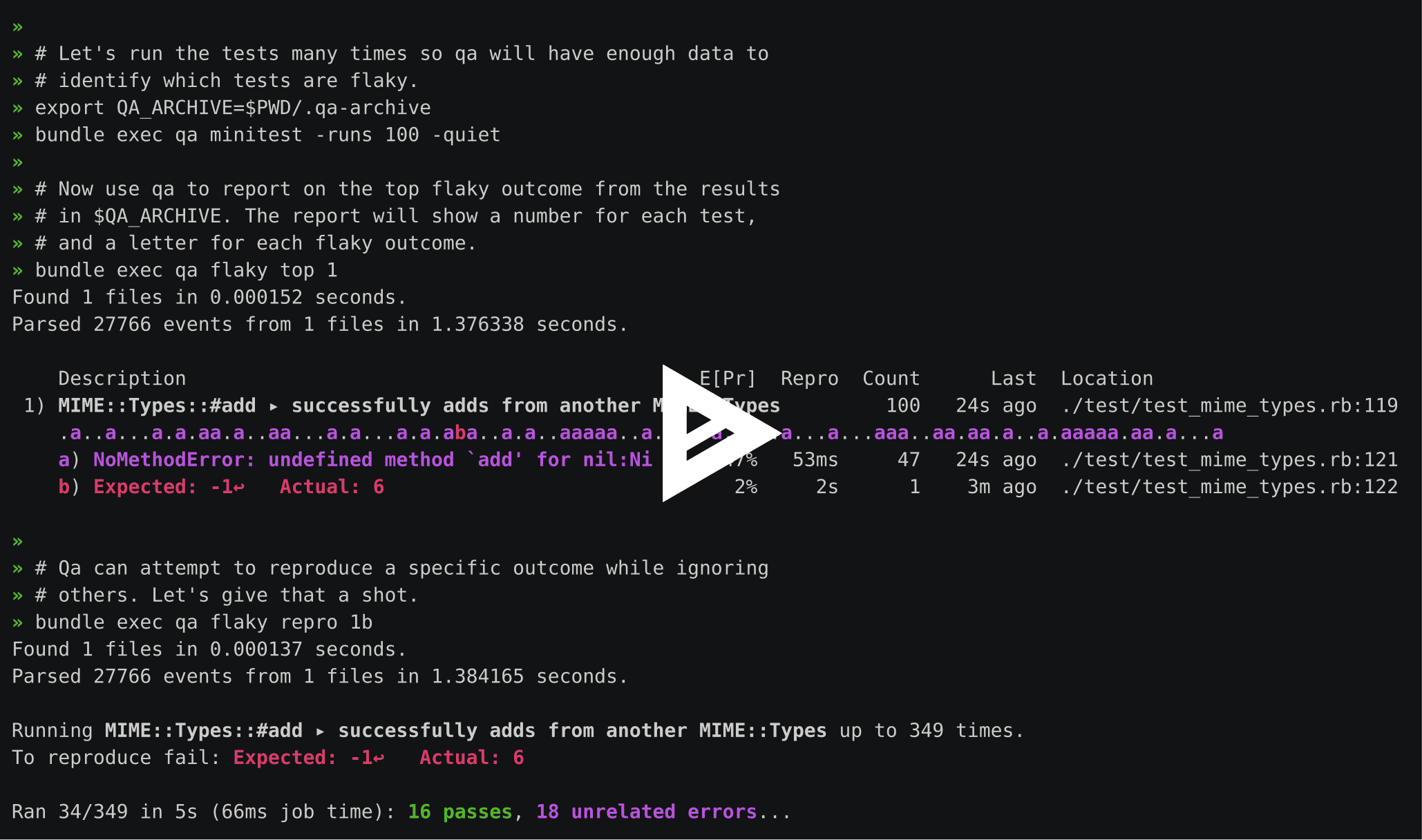 How does QA detect flaky tests?

At a high level, QA considers a test to be flaky if, for a particular code revision, that test has both passed and failed. That's why you should provide a -suite-coderef value to qa commands.

At a low level, QA uses a few tricks to find as many examples of a flaky failure as it can. The actual algorithm for discovering flaky tests is:

How will future versions of QA help me with test flakiness?

With QA, we've set out to address the shortcomings we see with today's testing tools. We want a toolset that's fast and gives us more firepower for dealing with the reality of flaky tests.