Easier REPL-based debugging for Clojure by saving and restoring snapshots of the local environment.

This library eases REPL-based development, by providing macros which help you save and restore the local environment of a piece of code with minimal effort.

Project status: beta quality. On the other hand, you typically will only use it in your development environment, so there's little risk in adoption. 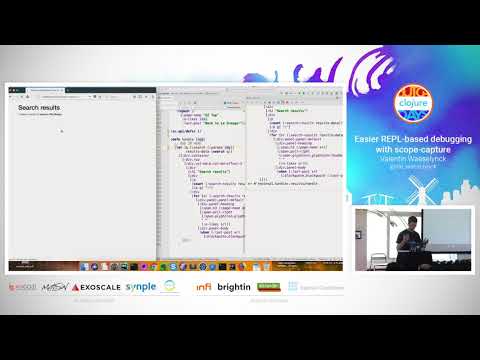 This library is designed to support the programming / debugging methodology advocated by Stuart Halloway in this blog post: REPL Debugging: No Stacktrace Required, which consists of:

What the blog post does not mention is that oftentimes, this first step (recreating the local environment) can get very tedious and error-prone; especially when the values of the environment are difficult to fabricate (HTTP requests, database connections, etc.), which can be the case for online programs such as web servers, or if you don't have a keen knowledge of the project.

scope-capture alleviates this pain by:

As a consequence, to reproduce the runtime context of a code expression, you only need to get it to execute once (not necessarily from the REPL). This makes for:

With both Leiningen and Boot, it's better not to include scope-capture in your project dependencies but rather in your local environment. Here's how to do it :

Add the following to the :user profile in ~/.lein/profiles.clj:

Assume you need to debug a function with a bunch of locals:

You can now use the letsc macro to recreate the scope of your spy call at the previous execution:

You can also use defsc to recreate the scope by def-ing Vars, which is more convenient if you're using the 'evaluate form in REPL' command of your editor:

If your REPL supports it, you can also achive the same effect by launching a sub-REPL (won't work with nREPL)

For these reasons, using sc.api/letsc or a sub-REPL is generally more error-proof than using defsc, although in many cases it is less practical.

Distributed under the MIT license.