Package for handling search in Thinktool

This repository contains the source code of Thinktool, an associative note-taking application inspired by TheBrain and Roam Research.

Check out the demo in your browser here! 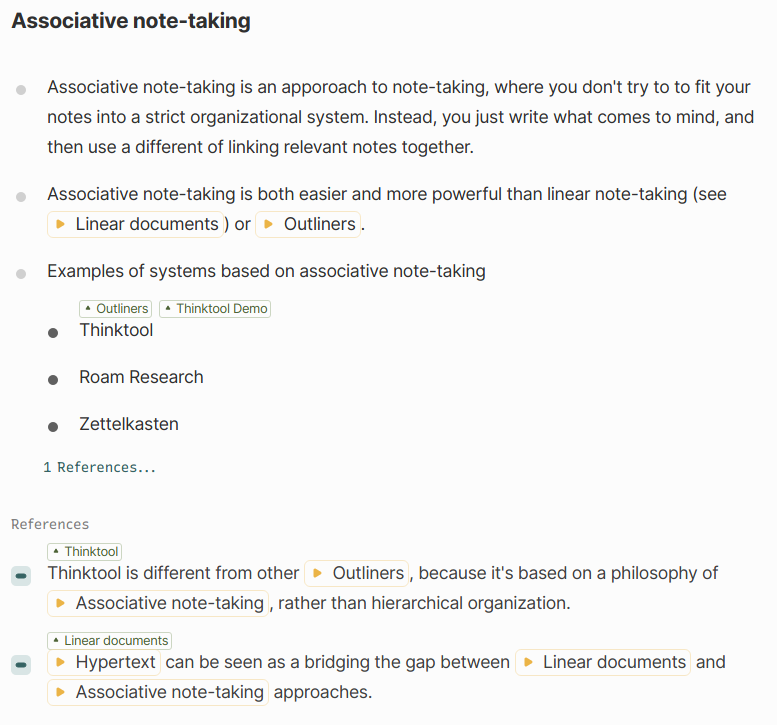 No-one else is working on Thinktool, so development is slow. However, I use Thinktool for all my note-taking (after switching from Obsidian), and I'm still actively working on it (as of September 2021).

Currently, the main priorities are improving the desktop client and offline-only support for improved privacy and data security as well as improving the UX and "learnability". There is no specific roadmap or time estimates.

The website and newsletter haven't been updated in a while. If you want to follow Thinktool's development, watch this repository.

Comparison to other software

Offline client: Obsidian and Logseq have excellent offline clients, which let you store your data in Markdown files locally. Thinktool does have an offline desktop client, but it's janky in comparison and uses a SQLite database for data storage.

Transclusion: To work around the issue of connecting individual items, Roam Research and Logseq support embedding (transcluding) blocks. However, recursive transclusion is not supported, and transclusions are second-class. Thinktool doesn't need transclusion, because the same item can simply exist in multiple places -- there is no difference between the "original" item and its clones.

Hierarchical structure: If you want to connect pages hierarchically, Roam Research, Logseq and Obsidian require you to create a separate index page where you link the different pages together (or use some other custom system). Thinktool makes no distinction between pages and items, so you can simply add one page as a child of another page.

Miscellaneous features: Roam Research, and to a lesser extent Logseq, have a bunch of neat features that let you use it for task management, spaced repetition and more. Thinktool is designed just for note-taking, so it doesn't have a lot of extra features.

Ease of use and UI: Even though Thinktool's data model is arguably simpler than these other tools, the UI is quite a bit worse, so it ends up being harder to understand.

All content of this repository to which I own the copyright is licensed under the terms of the GNU AGPLv3 or any later version as described in LICENSE.md.

This repository is not currently accepting issues or pull requests. Please see Thinktool's web page for information about how to contact me with your feedback about Thinktool. I may occationally force push to this repository, since I'm not expecting anyone else to be actively working on it. You are welcome to create your own fork.

The instructions in this README are mostly written for myself, and may not be sufficient to compile this project on your own. However, you can find some hints on how to run it in .github/workflows.

You will always be able to compile and use this version of Thinktool for free. The online service hosted at https://thinktool.io may eventually become a subscription service, but it's currently also free, and probably will be for a while.

The generated output goes in the /dist/ directory. Each subdirectory is intended to be deployed differently:

The application consists of three parts:

The static resources should be deployed to a static site hosting service, while the server code should be run on an appropriate server using Node.js. The desktop client is bundled as an executable app.

Yarn is required, since we use Yarn Workspaces. You will need to have the following dependencies installed:

If you don't want to install these dependencies on your development machine, there is a Dockerfile descirbing a Debian system with most of those dependencies installed available in the tools/dev/ directory. Use a separate Docker container for PostgreSQL. For example:

There is also a script that does this for you:

We use Yarn to manage dependencies. The src/ directory is set up as a workspace:

From there, you can install everything with a single command:

This will automatically link local packages together, so you can test the whole application, even if the packages are published separately. However, this also means that you will need to build the dependencies. To build all packages, run:

Then build the web client and other static resources with:

Then, set AZURE_STORAGE_ACCOUNT and AZURE_STORAGE_KEY and run ./tools/deploy-static.sh to deploy static files to Microsoft Azure Storage.

The desktop client can currently be built for Linux and Windows. We're planning on supporting macOS in the future. It must be built on the same platform that is being targeted.

On Linux, build the desktop client with:

Even on Windows, you need to use bash as your shell. Run:

(Note that building the desktop client clears out the dist/static/ directory. This is a temporary hack; see the build-desktop-linux.sh and build-desktop-windows.sh files for more information.)

Once you have built the desktop client, the output will be in dist/. Set AZURE_STORAGE_ACCOUNT and AZURE_STORAGE_KEY and run ./tools/deploy-static.sh to deploy these files to Microsoft Azure Storage.

The server uses a PostgreSQL database. Set the following environment variables before running the server:

You will need to manually set up the database schema. See tools/db/_initialize.sql, though this may be outdated.

For sending emails (used for "Forgot my password" functionality), we use Mailgun. Configure the following environment variables:

Additionally, the server expects the following environment variables to be set:

Build the server as a Docker image:

Once you have the thinktool image, run it with the environment variables given above:

When you are ready to push out a client-side update, follow this checklist:

(Note: The fact that we need to do all this manually is a flaw in the workflow. We should look into finding better approaches, or at the very least automating it.)