Messy datasets? Missing values? missingno provides a small toolset of flexible and easy-to-use missing data visualizations and utilities that allows you to get a quick visual summary of the completeness (or lack thereof) of your dataset. Just pip install missingno to get started.

This quickstart uses a sample of the NYPD Motor Vehicle Collisions Dataset dataset. To get the data yourself, run the following on your command line:

Then to load the data into memory:

The rest of this walkthrough will draw from this collisions dataset. I additionally define nullity to mean whether a particular variable is filled in or not.

The msno.matrix nullity matrix is a data-dense display which lets you quickly visually pick out patterns in data completion. 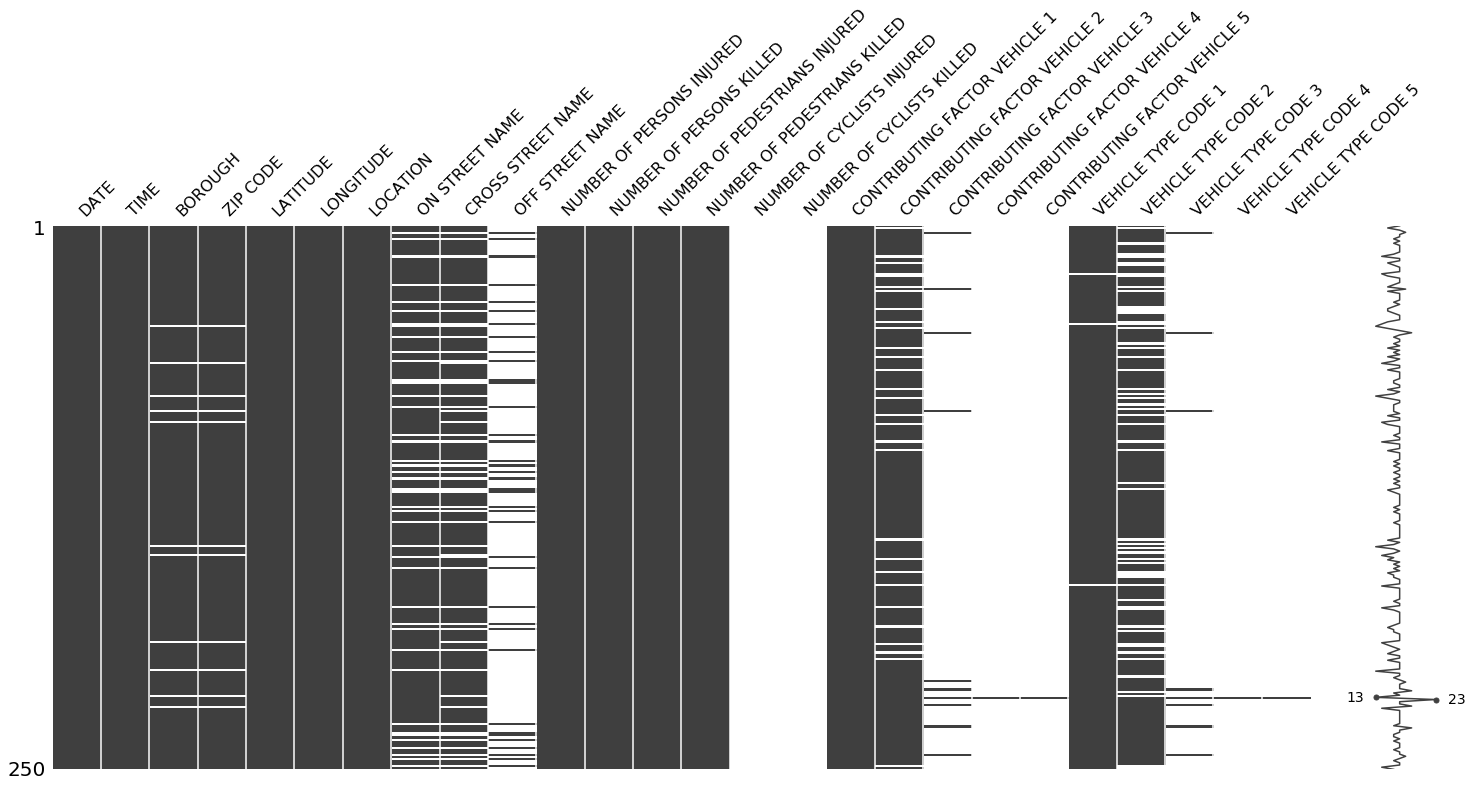 At a glance, date, time, the distribution of injuries, and the contribution factor of the first vehicle appear to be completely populated, while geographic information seems mostly complete, but spottier.

The sparkline at right summarizes the general shape of the data completeness and points out the maximum and minimum rows.

This visualization will comfortably accommodate up to 50 labelled variables. Past that range labels begin to overlap or become unreadable, and by default large displays omit them.

If you are working with time-series data, you can specify a periodicity using the freq keyword parameter:

msno.bar is a simple visualization of nullity by column: 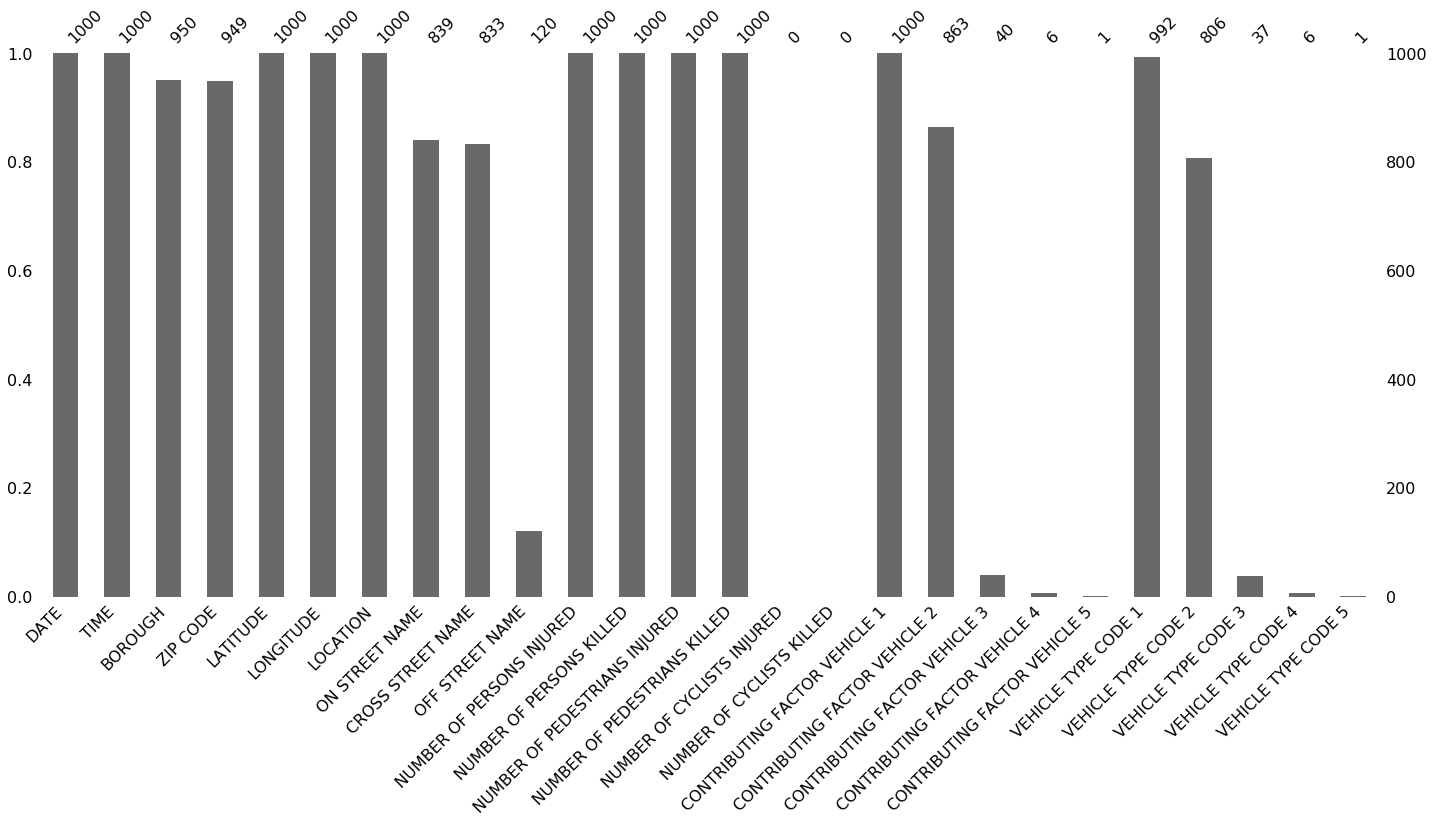 You can switch to a logarithmic scale by specifying log=True. bar provides the same information as matrix, but in a simpler format. 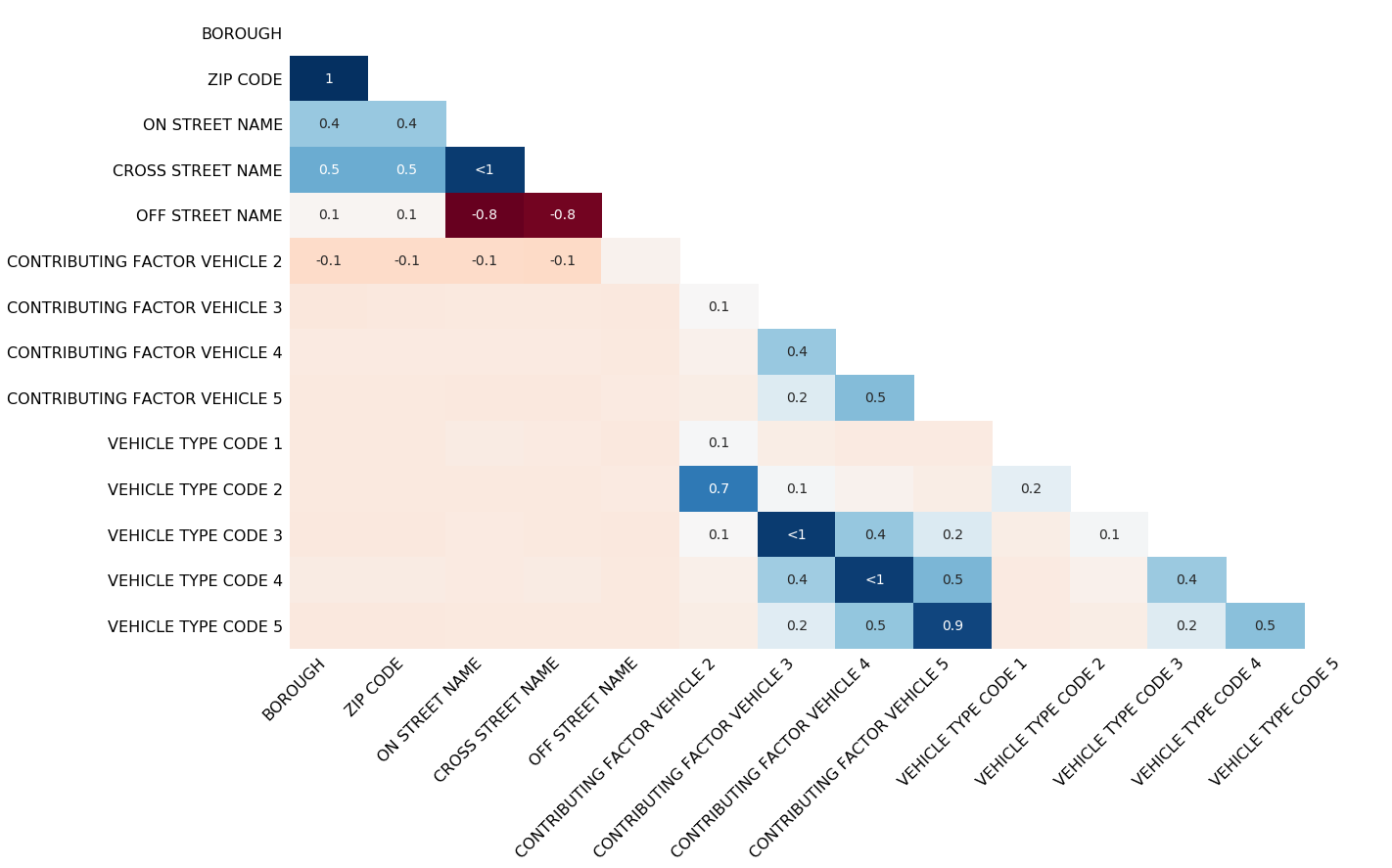 In this example, it seems that reports which are filed with an OFF STREET NAME variable are less likely to have complete geographic data.

Variables that are always full or always empty have no meaningful correlation, and so are silently removed from the visualization—in this case for instance the datetime and injury number columns, which are completely filled, are not included.

Entries marked <1 or >-1 are have a correlation that is close to being exactingly negative or positive, but is still not quite perfectly so. This points to a small number of records in the dataset which are erroneous. For example, in this dataset the correlation between VEHICLE CODE TYPE 3 and CONTRIBUTING FACTOR VEHICLE 3 is <1, indicating that, contrary to our expectation, there are a few records which have one or the other, but not both. These cases will require special attention.

The heatmap works great for picking out data completeness relationships between variable pairs, but its explanatory power is limited when it comes to larger relationships and it has no particular support for extremely large datasets.

The dendrogram allows you to more fully correlate variable completion, revealing trends deeper than the pairwise ones visible in the correlation heatmap: 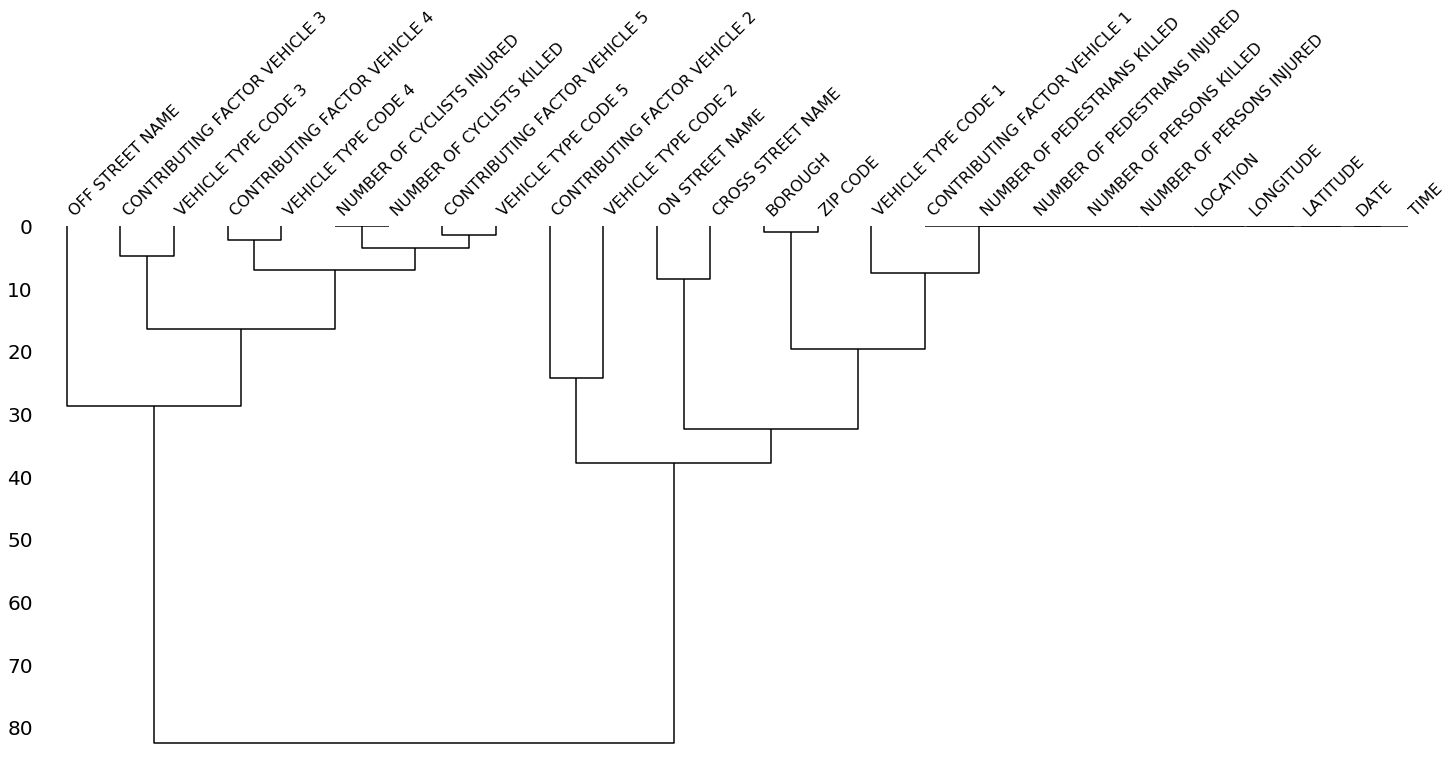 The dendrogram uses a hierarchical clustering algorithm (courtesy of scipy) to bin variables against one another by their nullity correlation (measured in terms of binary distance). At each step of the tree the variables are split up based on which combination minimizes the distance of the remaining clusters. The more monotone the set of variables, the closer their total distance is to zero, and the closer their average distance (the y-axis) is to zero.

To interpret this graph, read it from a top-down perspective. Cluster leaves which linked together at a distance of zero fully predict one another's presence—one variable might always be empty when another is filled, or they might always both be filled or both empty, and so on. In this specific example the dendrogram glues together the variables which are required and therefore present in every record.

Cluster leaves which split close to zero, but not at it, predict one another very well, but still imperfectly. If your own interpretation of the dataset is that these columns actually are or ought to be match each other in nullity (for example, as CONTRIBUTING FACTOR VEHICLE 2 and VEHICLE TYPE CODE 2 ought to), then the height of the cluster leaf tells you, in absolute terms, how often the records are "mismatched" or incorrectly filed—that is, how many values you would have to fill in or drop, if you are so inclined.

As with matrix, only up to 50 labeled columns will comfortably display in this configuration. However the dendrogram more elegantly handles extremely large datasets by simply flipping to a horizontal configuration.

One kind of pattern that's particularly difficult to check, where it appears, is geographic distribution. missingno supports visualizing geospatial data nullity patterns with a geoplot visualization. This is an experimental data visualization type, and requires the geoplot and geopandas libraries. These are optional dependencies are must be installed separately from the rest of missingno. Once you have them you can run:

If no geographical context can be provided, geoplot will compute a quadtree nullity distribution, as above, which splits the dataset into statistically significant chunks and colorizes them based on the average nullity of data points within them. In this case there is good evidence that the distribution of data nullity is mostly random: the number of values left blank varies across the space by only 5 percent, and the differences look randomly distributed.

Quadtrees have the advantage that they don't require any information about the space besides latitude/longitude pairs. Given enough data (hundreds of thousands of records), a geoplot can even reconstruct the space being mapped. It works less well for small datasets like this sample one.

If you can specify a geographic grouping within the dataset, you can plot your data as a set of minimum-enclosure convex hulls instead:

Convex hulls are usually more interpretable than the quadtree, especially when the underlying dataset is relatively small (as this one is). We again see a data nullity distribution that's seemingly at random, giving us confidence that the nullity of collision records is not geographically variable.

The msno.geoplot chart type extends the aggplot function in the geoplot package, and accepts keyword arguments to the latter as parameters. The geoplot documentation provides further details (including how to pick a better map projection). For more advanced configuration details for the rest of the plot types, refer to the CONFIGURATION.md file in this repository.

That concludes our tour of missingno!

For thoughts on features or bug reports see Issues. If you're interested in contributing to this library, see details on doing so in the CONTRIBUTING.md file in this repository.

You may cite this package using the following format (via this paper):