novelWriter is a Markdown-like text editor designed for writing novels and larger projects of many smaller plain text documents. It uses its own flavour of Markdown that supports a meta data syntax for comments, synopsis, and cross-referencing between files. It's designed to be a simple text editor that allows for easy organisation of text files and notes, built on plain text files for robustness.

The plain text storage is suitable for version control software, and also well suited for file synchronisation tools. The core project structure is stored in a project XML file. Other meta data is primarily saved in JSON files.

The full documentation is available at novelwriter.readthedocs.io.

The contributing guide is available in CONTRIBUTING.

The application is still under initial development, but all core features have now been added. The core functionality has been in place for a while, and novelWriter is being used for writing projects by the author and collaborators.

No new major features will be added at this time, until the application is stable. Until then, novelWriter is in a beta state. Please report any issues you encounter via the repository's issue tracker.

You should be able to use novelWriter for real projects, but as with all software, please make regular backups of your data. There is a built in backup feature that can pack the entire project into a zip file each time the main window or the project is closed. Please check the documentation for further details.

The application is written in Python 3 using Qt5 via PyQt5. It is developed on Linux, but it should in principle work fine on other operating systems as well as long as dependencies are met. The unit tests are run on the latest versions of Ubuntu Linux, Windows Server and macOS.

novelWriter is available on pypi.org, and can be installed with:

To upgrade an existing installation, use:

Dependencies are installed automatically, but can generally be installed with:

Below are some brief instructions on how to get started on different operating systems.

If you run from source, install the dependencies via pip, or directly from the OS repo. There are very few dependencies, and they should be available in the standard repo. The Python packages needed are pyqt5, lxml and pyenchant.

You can also install novelWriter from source with:

The last line will install the application icons and set up a launcher for novelWriter. The method uses hardcoded paths, so it may or may not work for your Linux distro. If you have any issues, please submit a ticket so the script can be tuned.

The script may prompt you to choose which executable to configure if it finds more than one.

If you want to run directly from the source, the application can be started with:

You can also create a launcher for running directly from source with:

This will install the launcher and icons for the current user. To install them system-wide, run the above command with sudo or as root.

These instructions assume you're using brew, and have Python and pip set up. If not, see the brew docs for help.

Main requirements are installed via the requirements file. You also need to install the pyobjc package on macOS, so you must run:

For spell checking you may also need to install the enchant package. It comes with a lot of default dictionaries.

On Windows, you may first need to install Python. See the python.org website for download packages. It is recommended that you install the latest version of Python 3.8.

Note: On Windows, make sure Python3 is in your PATH if you want to launch novelWriter from command line. You can also right click the novelWriter.py file, create a shortcut, then right click again, select "Properties" and change the target to your python executable and novelWriter.py.

You can also run the make.py script to generate a single executable, or an installer. See Build and Install novelWriter for more details.

Exporting to Markdown requires PyQt/Qt 5.14. There are no known minimum for lxml, but the code was originally written with 4.2. The optional spell check library must be at least 3.0.0 to work with Windows 64 bit systems. On Linux, 2.0.0 also works fine.

If no external spell checking tool is installed, novelWriter will use a basic spell checker based on standard Python package difflib. Currently, only English dictionaries are available for this spell checker, but more can be added to the nw/assets/dict folder. See the README file in that folder for how to generate more dictionaries. Note that the difflib-based option is both slow and limited.

If you need to debug novelWriter, you must run it from command line. It takes a few parameters, which can be listed with the switch --help. The --info, --debug or --verbose flags are particularly useful for increasing logging output for debugging.

Some features of novelWriter are listed below. Consult the documentation for more information.

novelWriter is not a full-feature Markdown editor. It allows for a minimal set of formatting needed for writing text documents for novels. These are currently limited to:

That is it. Features not supported in the editor are also not exported when using the export tool.

In addition, novelWriter adds the following, which is otherwise not supported by Markdown:

The core export format of novelWriter is HTML5. You can also export the entire project as a single novelWriter Markdown-flavour document. In addition, other exports to Open Document, PDF, and plain text is offered through the Qt library, although with limitations to formatting.

The HTML format is well suited for file conversion tools and import into other text editors.

New themes can easily be added to the nw/assets/themes folder. Have a look in the existing folders for examples of how to define the colours.

The structure of the project is shown on the left hand side of the main GUI. Project files are organised into root folders, indicating what class of file they are. The most important root folder is the Novel folder, which contains all of the files that makes up the finished novel. Each root folder can have subfolders. Folders have no impact on the final project structure, they are purely tools for organising the files in whatever way the user needs.

Each novel file can be assigned a layout format, which shows up as a flag next to the item in the project tree. These are mostly to help the user track what they contain, but they also have some impact on the format of the exported document. See the documentation for further details.

Supporting note files can be added for the story plot, characters, locations, story timeline, etc. These have their separate root folders. These are optional files.

The different notes can be assigned tags, which other files can refer back to using the @ meta keywords. This information can be used to display an outline of the story, showing where each scene connects to the plot, and which characters, etc. occur in them. In addition, the tags themselves are clickable in the document view pane, and control-clickable in the editor. They make it possible to quickly navigate between the documents while editing.

This is Open Source software, and novelWriter is licensed under GPLv3. See the GNU General Public License website for more details, or consult the LICENSE file.

Bundled assets have the following licenses: 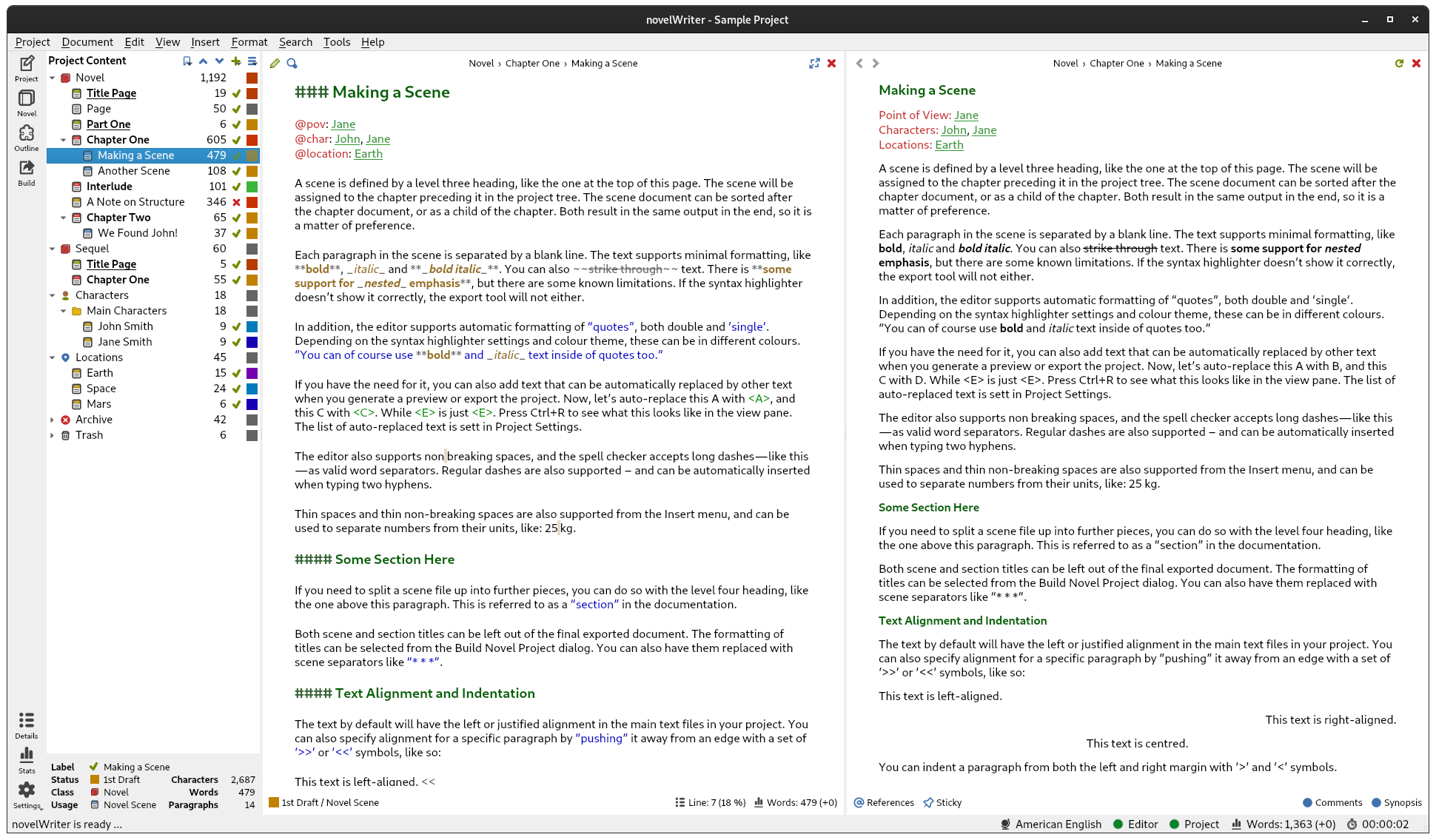 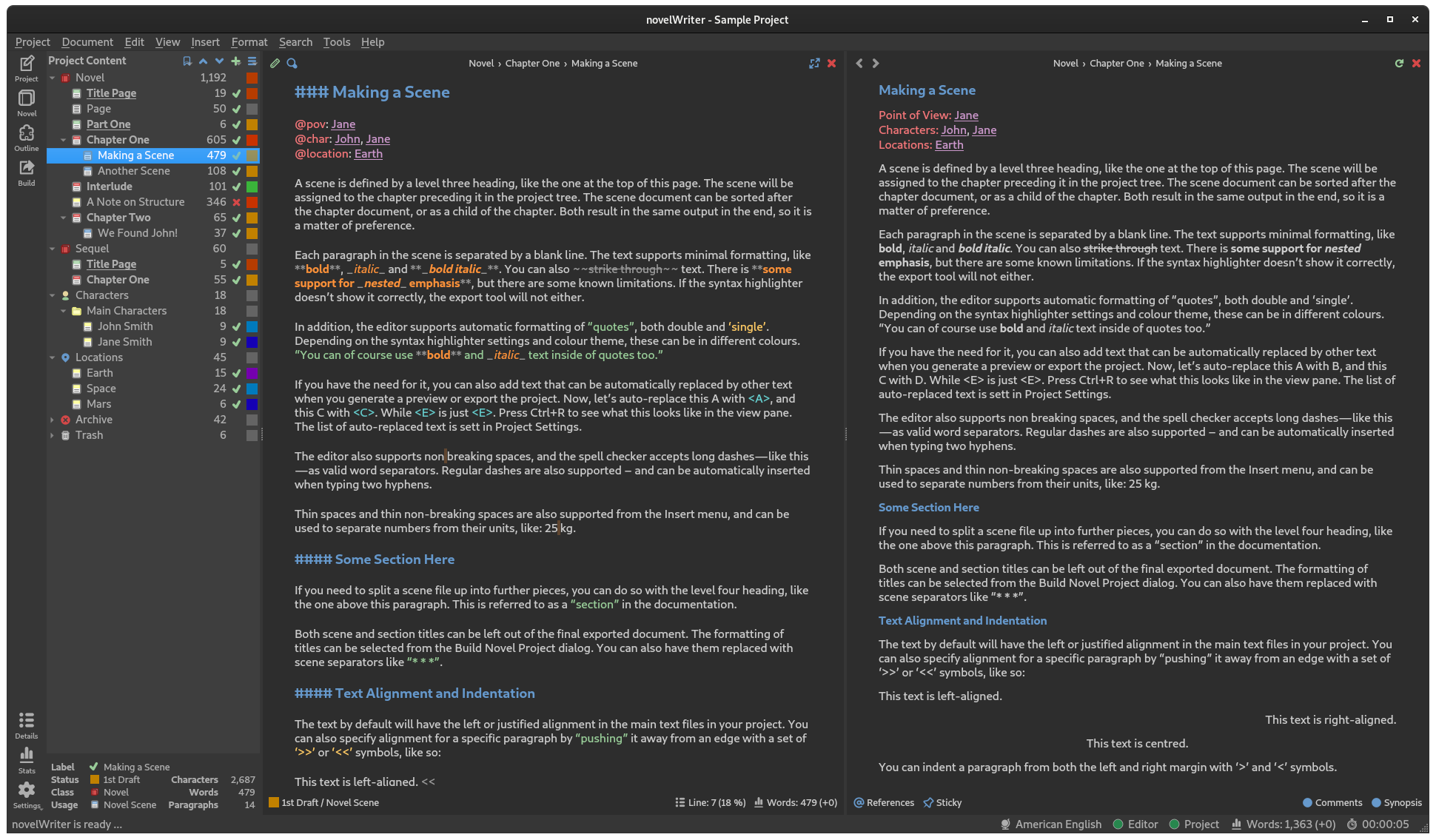