Web-PDB is a web-interface for Python's built-in PDB debugger. It allows to debug Python scripts remotely in a web-browser. 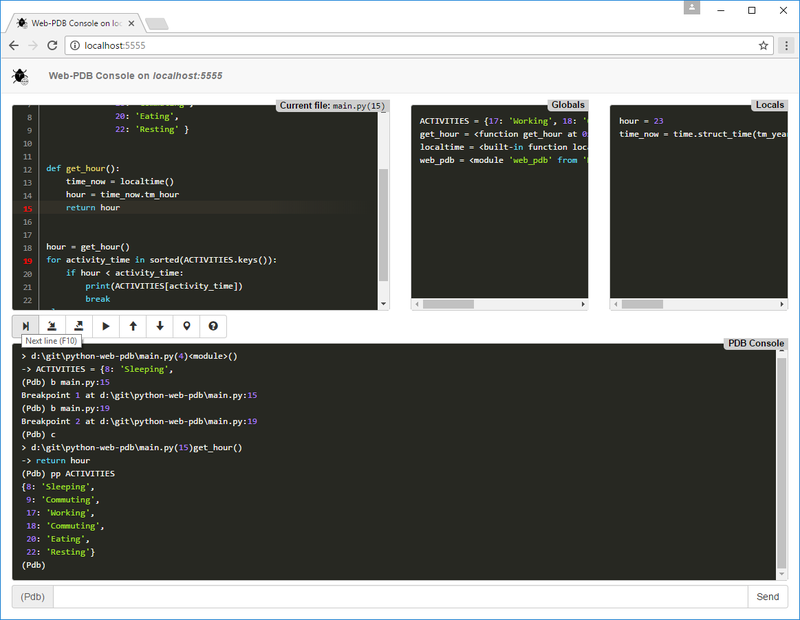 Insert the following line into your Python program at the point where you want to start debugging:

The set_trace() call will suspend your program and open a web-UI at the default port 5555 (port value can be changed). Enter in your browser's address bar: http://<your Python machine hostname or IP>:5555, for example http://monty-python:5555, and you should see the web-UI like the one on the preceding screenshot. Now you can use all PDB commands and features. Additional Current file, Globals and Locals information boxes help you better track your program runtime state.

Subsequent set_trace() calls can be used as hardcoded breakpoints.

Web-PDB is compatible with the new breakpoint() function added in Python 3.7. Set environment variable PYTHONBREAKPOINT="web_pdb.set_trace" to launch Web-PDB with breakpoint().

For more detailed info about the Web-PDB API read docstrings in the ./web_pdb/__init__.py file.

Web-PDB provides inspect or i command that is not present in the original PDB. This command outputs the list of object's members along with their values. Syntax: inspect <object_name> or i <object_name>.

Special members with names enclosed in double underscores (__) are ignored.

Considerations for Multithreading and Multiprocessing Programs

Web-PDB maintains one debugger instance that traces only one thread. You should not call set_trace() from different threads to avoid race conditions. Each thread needs to be debugged separately one at a time.

Each process can have its own debugger instance provided you call set_trace with a different port value for each process. This way you can debug each process in a separate browser tab/window. To simplify this you can use set_trace(port=-1) to select a random port between 32768 and 65536.

The debugger icon made by Freepik from www.flaticon.com is licensed by CC 3.0 BY.